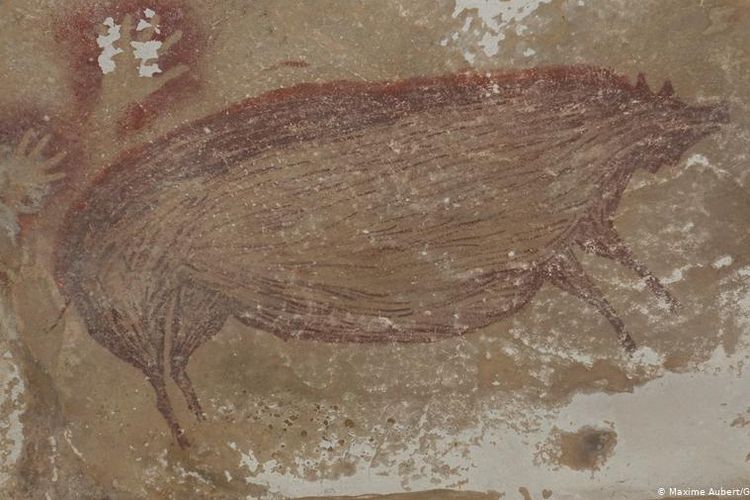 Lihat Foto
The 45,500 year-old painting of a Sulawesi Warty Pig found on the Leang Tedongnge cave, the Faros-Pangkep karst complex of caves in South Sulawesi(Maxime Aubert)

A prehistoric drawing of a life-sized wild pig has been determined to be at least 45,500 years old, experts said in an article published in the journal Science Advances on Wednesday.

An Indonesian doctoral student, Basran Burhan, made the discovery as part of surveys his team was carrying out with Indonesian officials in the island of Sulawesi in 2017, experts of the Griffith University, who worked with Indonesian archaeologists from Penelitian Arkeologi Nasional (ARKENAS), stated on their website.

"The Sulawesi warty pig painting we found in the Limestone cave of Leang Tedongnge is now the earliest known representational work of art in the world, as far as [we] are aware," Adam Brumm, from Griffith University's Australian Research Center for Human Evolution and co-leader of the team that made the discovery, said.

The Sulawesi warty pig is 136 centimeters wide and 54 centimeters tall (53.5 x 21 inches). It has a short crest of upright hair and a pair of horn-like facial warts, typical for adult males of the species. Dark red ocher pigment has been used to paint it, researchers said.

There are two handprints above the pig's back and it appears to be facing two other pigs that can only be faintly seen.

Scientists believe the artists would have had to place their hands on a surface and then spit pigment over it. These prints could contain residual DNA, providing new insights into human beings at the time.

According to Brumm, "The pig appears to be observing a fight or social interaction between two other warty pigs."

The Leang Tedongnge cave, where the painting was found, is surrounded by limestone cliffs. The area is about an hour's walk from the nearest road and is accessible only during the dry season.

Members of the Bugis community,…