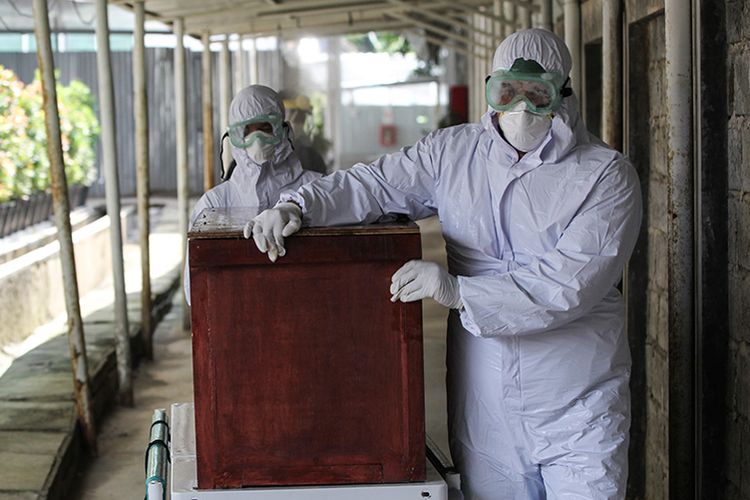 Lihat Foto
Hospital personnel at RSUD Bogor wheel out a coffin containing the remains of a patient who died of Covid-19 on Monday (11/5/2020)(KOMPAS.COM/KRISTIANTO PURNOMO) BOGOR, KOMPAS.com – A hospital in the city of Bogor, West Java province has found itselfin the spotlight, after a family of a patient who died of Covid-19 filed a complaint against the institution for switching her remains with another deceased patient who was not their relative.

The complainant, who was identified as DF, said the incident occurred at the Bogor Regional General Hospital [RSUD Bogor] on Wednesday, December 30 2020.

“My family and I wanted to see the remains of our mother [who was identified as WT] before it was buried according to [Covid-19 health protocols]. Initially, the hospital has forbidden us to see her body, due to various reasons, for ten hours” DF recalled.

“We insisted on checking her coffin to ensure her body was there, before it got loaded to the ambulance. The hospital eventually complied.” Instead of providing closure for DF and her family, they were in for a shock, as they found that the remains were not their mother's.

"When we opened the coffin, we saw that it was a ma unrelated to us. I asked the attendant ‘Can’t you see that it is a man? Don’t you even see he has a mustache??’” DF recalled to Kompas.com on Monday, January 4 2020.

DF highlighted two reasons for her disappointment and anger with RSUD Bogor. “The hospital took more than ten hours to prepare my mother’s remains, twice as long as the four hours needed to prepare Covid-19 cases for burial,” she sighed.

“The hospital did not even show us the right body. ”

“Second, RSUD Bogor’s switching of the remains does not show its standing as a designated hospital for Covid-19 cases. If we did not insist on seeing her remains, it will not be my mother we are burying.”

RSUD Kota Bogor spokesman Taufik Rahmat has apologized to DF’s family and attributed the mistake to a communications breakdown between the hospital staff.

Bogor Mayor Bima Arya Sugiarto also weighed in on the controversy. He noted that there was no duty officer during the incident.

“RSUD Bogor should have somebody on guard at all times. They should also tag the deceased’s names on their coffins,” he said.

Bogor also made the headlines in December 2020, after head of the outlawed Islamic Defenders Front [FPI] Rizieq Shihad put the UMMI hospital in the headlines after he attempted to cover up the results of his Covid-19 swab test.