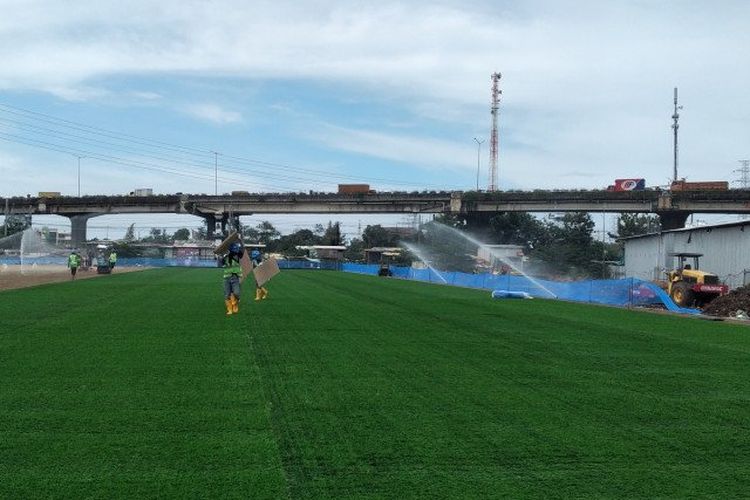 JAKARTA, KOMPAS.com – Jakarta’s newest sports facility is set to do its bit for Indonesia as the country prepares to host the 2021 FIFA U-20 World Cup.

The developers of the Jakarta International Stadium (JIS) announced that it will prepare training facilities for the soccer tournament before it kicks off next May.

“We aim to complete two fields for training purposes, along with their tribune seats, by the end of the year,” said Arnold Kindangen, a spokesman for the Jakarta Propertindo consortium building the stadium in Tanjung Priok on North Jakarta on Tuesday, December 15.

“We have requested the Jakarta Provincial Administration’s Youth and Sports Service’s aid in preparing the stadium, which is currently 40 percent done since work started on September 2019. We hope to complete JIS by October 2021.”

He added that the training ground, and the rest of the 221,000 square meter stadium, will use hybrid turf, or a mix between natural and synthetic grass.

Arnold is certain that the composite pitch, which is the first of its kind in Indonesia, would make an ideal training ground for the squads in the tournament.

Once completed, the Rp. 4.08 trillion ($288,916,632) stadium in North Jakarta will seat 82,000 spectators, and be the second stadium in Southeast Asia to boast a retractable roof after Singapore’s National Stadium.

Indonesia Expresses Support for Ukraine but...
Comments
There are no comments
Comment wisely and responsibly. Comments are entirely the responsibility of the commentator as regulated in the ITE Law
Thank You! We have received your report. We will remove comments that conflict with the Community Guidelines and the ITE Law.