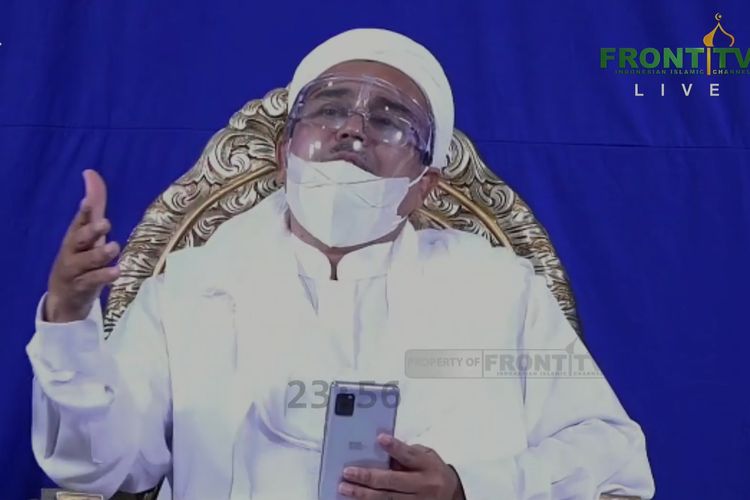 “I would like to convey my apologies to the public for holding mass rallies at Soekarno-Hatta Airport, Jakarta, as well as at Bogor, West Java,” he said at an online gathering of the 212 Reunion Rally political organization streamed on FPI’s Front TV YouTube channel on Wednesday, December 2.

“I particularly regret that the gatherings quickly got out of control, and so call on [FPI members] not to form crowds. I will also cancel upcoming gatherings until the Covid-19 pandemic is officially over.”

Sporting a mask and face shield in the meeting, which also featured opposition politicians such as Amien Rais and Fadli Zon, Rizieq called on his followers to comply with health protocols.

“Abide by health protocols like washing hands as doing so is part of faith. Let us face [Covid-19] together until Allah lifts it [from the world],” he added.

Meanwhile, a photo showing Rizieq’s Covid-19 positive swab test has gone viral on social media. Dated November 28 from a test held the previous day, the image prompted a backlash from MER-C, the medical organization that allegedly issued the results.

“Rizieq did take his swab test that day. But [MER-C] did not issue that particular diagnosis, much less uploaded it online,” said MER-C Presidium Chairman Sarbini Abdul Murad.

“The results [of the test] are already disclosed with Rizieq’s family in accordance with patient-doctor confidentiality agreement. MER-C has no right to announce the outcome.”

Rizieq was thought to take…

Top 3 Unrivalled Diving Spots in Bali to Go for Vacation