The Riddle of Tenun Cual from Indonesia’s Bangka Belitung Province 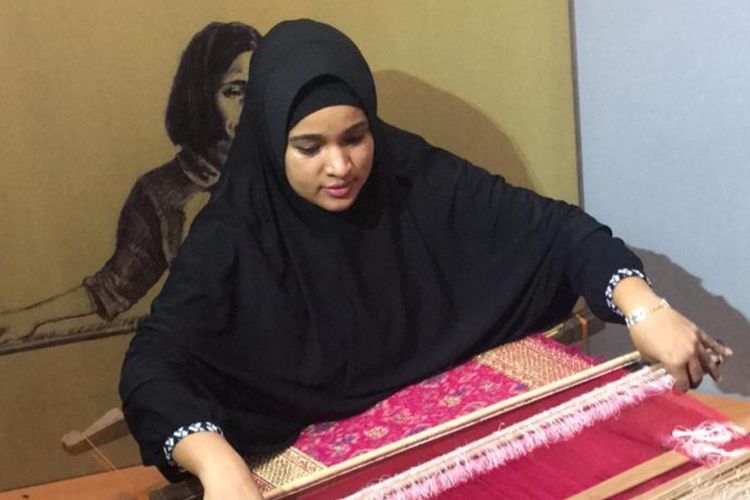 PANGKAL PINANG, KOMPAS.com – The women in the workshop at the town of Muntok, Bangka-Belitung province, deftly worked the red and gold cloth in the loom. They then wove the thread into exquisite patterns, much like their ancestors before them.

Known as tenun cual or dipped cloth due to the practice of dyeing the threads before weaving them, the textile has put Muntok on the map for hundreds of years.

“[Tenun cual] is long known to be one of [Bangka-Belitung’s] leading arts and crafts. They are influenced by the songket brocades of Sumatra and the ikat dyed cloth of Indonesia’s East and West Nusa Tenggara provinces,” said historian Akhmad Elvian to Kompas.com.

“They are made by women artisans in Muntok who are renowned for their skill in weaving scarves, dresses and other apparel from silk and gold cloth. What distinguishes them from other Indonesian textiles are the motifs, which are made with a technique similar to ikat.”

As with other Indonesian traditional like Javanese batik, ulos from North Sumatra or ikat, tenun cual’s beginnings were not determined by merchants but by Bangka’s noble class, who were known as Abang and Yang.

Elvian said tenun cual was primarily worn by the Abang and Yang for ceremonial occasions since their invention in the 18th century. He added that they have multiple uses, such as home decorations or showing the owner’s status, as well as mystical or even medicinal purposes.

“Since then, they derived their inspiration from Bangka’s flora and fauna, which were depicted in a more abstract manner than other cloths. This is due to the island’s Muslim majority and the Islamic taboo against depicting living organism.” But Elvian maintained that the… 4 Tips to Get the Best Bargain at Yogyakarta, Indonesia’s Historic Malioboro Street