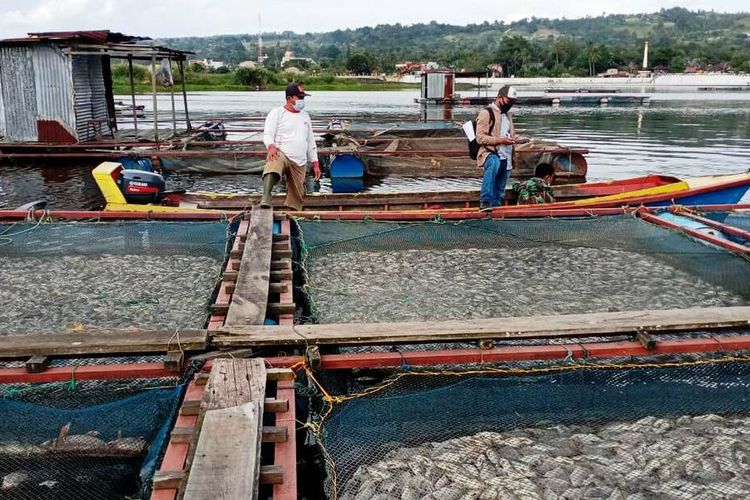 Head of Agriculture and Fisheries Agency in Samosir regency Vicktor Sitinjak said that about 109 tons of fish died in 38 floating net cages on Thursday, October 23 due to strong winds.

The fish cages are located in shallow water so when strong winds blow into the area, it causes the water to spin underneath, bringing uneaten feed residues to the surface. “The fish struggle to breathe because they lack of oxygen,” Vicktor said on Friday.

This was not the first such fish kill in the lake. In 2019, he added, a similar incident also occurred in Lake Toba near the border of Dairi and Samosir regencies.

Vicktor confirmed that the fish died because they struggled to breath following the strong wind, not a disease or polluting water.

“I suggest the fish farmers remove the cages from shallow water to deeper water so when the water rotates at the bottom, the feed residues will not reach the surface,” he said.

The dead fish will be buried in Hutatinggi District after coordination has been arranged with the Pangururan sub-district head, he added.

The dead fish will be placed in sacks, which will be carried to the shore by heavy-duty equipment. A truck will then transport them to the designated burial site.

“The truck bed will be covered with plastic to prevent the dead fish from falling onto streets and causing an unpleasant odor,” he said.

Indonesia to Register Tempeh to...
NEWS