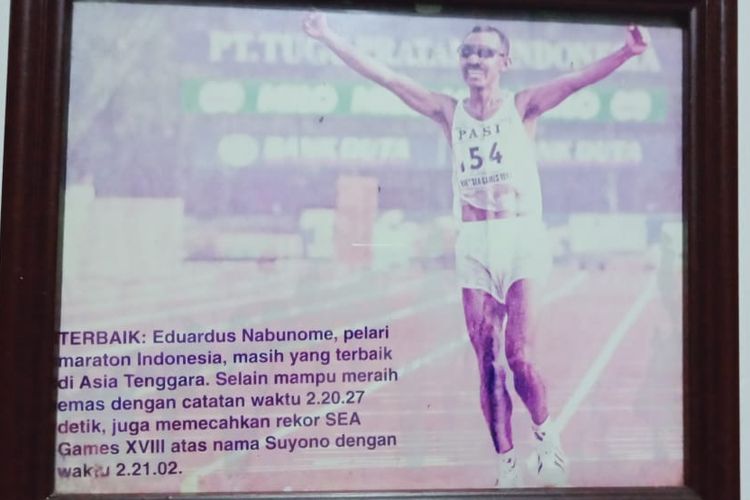 Lihat Foto
Indonesian track and field star Eduardus Nabunone during his heyday in the 1980s and early 1990s. The 52-year old died in Jakarta on Monday, 12 October 2020(Kurniasih Budi)

JAKARTA, KOMPAS.com – Indonesia has lost one of its sports greats, track and field star Eduardus ‘Edu’ Nabunone who passed away in Jakarta on Monday evening, October 12. He was 52.

“Coach Edu died at the Harapan Kita Heart Hospital,” said Kurniasih Budi, a parent of one of Edu’s proteges in the Eduard Athletic Club, a running club he founded to develop young Indonesian track and field talent.

“[His passing] occurred a day after he [was hospitalized] for suffering a heart attack during practice at the Gelora Bung Karno sports complex.”

Both are among the five records in his career that still stand. In all, Edu notched 14 records during his career, nine of which have already been broken. Edu is survived by his wife Marcelina Ina N Piran and six children.

Borneo Skeleton, 31,000 Years Old, Thought...
Comments
There are no comments
Comment wisely and responsibly. Comments are entirely the responsibility of the commentator as regulated in the ITE Law
Thank You! We have received your report. We will remove comments that conflict with the Community Guidelines and the ITE Law.