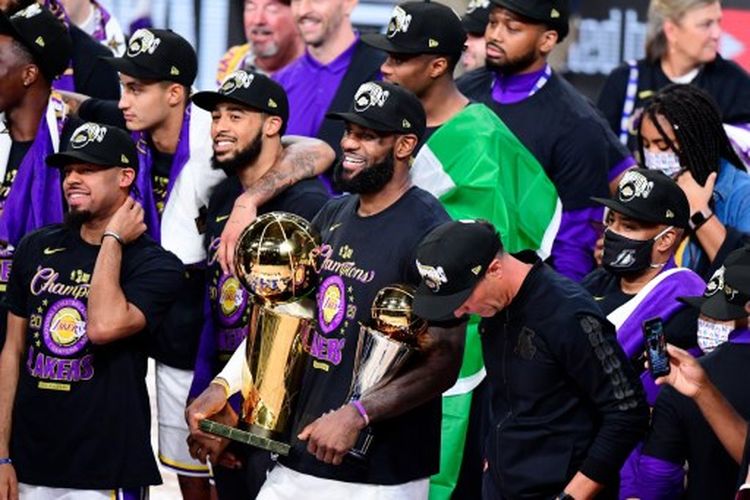 The Lakers completed their NBA win dedicating their victory to the late LA legend by defeating Miami 106-93 to capture the NBA Finals four games to two in a quarantine bubble at Orlando, Florida.

"Kobe, I know he's looking down on us super proud," Lakers star forward Anthony Davis said. "We miss him, and this is definitely for him."

Kobe Bryant together with his 13-year-old daughter Gianna Bryant and seven others were killed in a tragic helicopter crash on January 26 in suburban Los Angeles.

Nine months after the death of the basketball legend, the sports world remains stunned as it lost such a gifted talent at age 41.

"Kobe's voice is always in my head, always, every day, every minute... for us to be able to win this championship doesn't take away the sting of the loss, but what it does is it helps us add to their legacy.

"Kobe and Gianna's legacy will last forever. It will impact lives around the world in positive ways, and this Lakers championship in 2020 is partly to build on that legacy and honor them. The moment couldn't be any more special to do that for them."

Bryant's widow, Vanessa Bryant, posted a congratulations message on Instagram, saying: "Wish Kobe and Gigi were here to see this."

The Lakers captured their first NBA title since 2010, when Bryant led them to the last of his five career crowns.

"He said, 'I'll give you two, three years, you'll fix this. You'll get the Lakers back on top.'

Pelinka looked to the heavens and said, "I guess you were right, man. You gave me the energy to do it."

Davis received encouragement from Bryant at games in the months before the tragedy.

Outside the Lakers' home arena, the Staples Center in Los Angeles, fans took to the streets chanting, "Kobe, Kobe," despite being urged to celebrate at home due to the Covid-19 pandemic.

'Smiling down on us'

The Lakers missed a chance to win the title in their special black "Mamba" jerseys made in his honor with a loss in game five Friday.

"This was for Kobe regardless of what jersey we had on," said the Lakers' Markieff Morris.

"We knew we had to do this for Kobe and Gigi and the rest of the Laker Nation. This was a special one."

Lakers guard Rajon Rondo, who also won a title with Boston in 2008, joined the Lakers in 2018 and was happy to have been able to learn from Bryant by playing against him.

"Winning for Kobe has been in my mind for a while," Rondo said.

"To be able to compete with Kobe, understand and learn so much from him by watching his film and by studying him, it's definitely an honor.

"And to come full circle to win in his honor, his daughter's honor, unbelievable season that we've had. And to be able to prevail and stay focused and continue to get the job done, I know he's definitely smiling down on us."