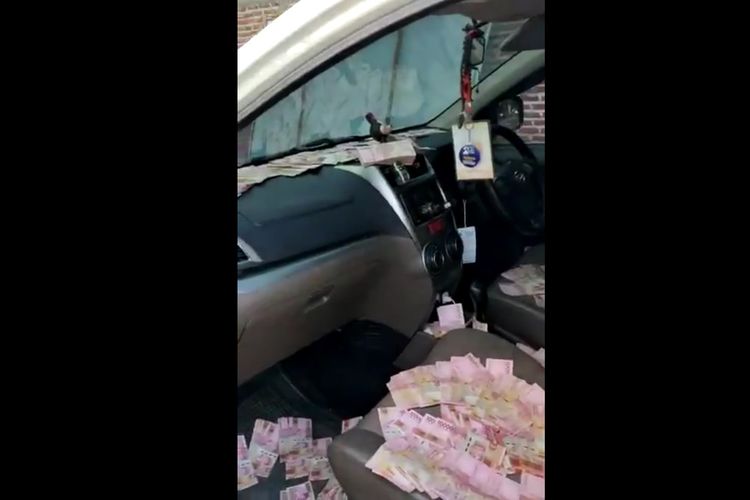 Lihat Foto
A screen grab of video footage showing scattered money inside a car that allegedly belongs to a supporter of candidate pair of regional elections in Mojokerto regency in East Java, Indonesia. (Tangkapan layar video)

The words “Ikbar wins” with number one next to it are seen in the front part of the white car, while the words “Ikfina and Gus Barra” were seen at its doors. This is referring to the Mojokerto regent and deputy regent hopeful Ikfina Fahmawati and Muhammad Al-Barra.

When the car was opened, stacks of 100,000 rupiahs bills were placed on the front and rear seats.

Also read: Indonesia to Push Ahead with 2020 Regional Elections Despite Covid-19 Challenges

Campaign team head Santoso, who only goes by one name, admitted that the white car belongs to one of their supporters. Santoso said that the money also belonged to the car owner but had nothing to do with the candidates referred to in the video.

“The money had nothing to do with the regional elections. The owner said it was money to buy a plot of land,” Santoso told Kompas.com on Monday, October 5.

The campaign team for the two candidates has warned the car owner, saying that the incident should never happen again.

“We warned the car owner not to do it again as the action could damage the team’s performance,” Santoso said, adding that the campaign team will not hesitate to take legal action against the car owner.

He said the candidates carried out the campaign according to the rules and procedures of the regional elections.