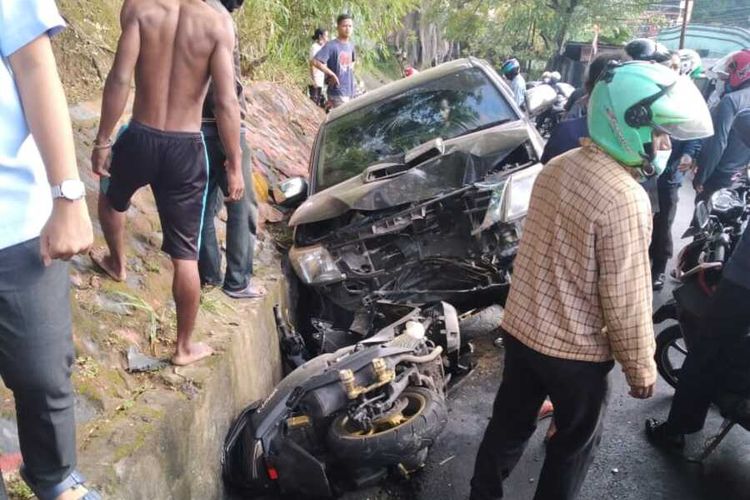 Lihat Foto
A car that was driven by Yalimo deputy regent Erdi Dabi got stuck in gutter after a road accident that killed woman police in Jayapura in Papua on Wednesday September 16, 2020. (Istimewa)

JAYAPURA, KOMPAS.com – Jayapura police have named Yalimo Deputy Regent Erdi Dabi as a suspect in a road accident that allegedly killed a policewoman at 7:30am local time on Wednesday, September 16 in Papua.

Jayapura police reported that the victim, who is identified as Police Chief Brigadier (Bripka) Meisye Batfeny, 36, got hit on the back of her neck that caused sudden death. Her right knee was torn and broken, too.

“He [deputy regent] has been named a suspect and has been detained,” said Papua Police chief Inspector General Paulus Waterpauw in Jayapura, Thursday, September 17.

Paulus said that the accident involving Erdi Dabi has claimed another person’s life. Therefore, he has been charged under Law No. 22/2009 on traffic and land for causing a death.

“Regarding the suspect’s political rights, that’s another issue to be handled later. There are competent relevant parties who will take care of it. Our responsibility is to proceed with the legal process of the accident based on the traffic law,” he said.

Paulus confirmed that the suspect was drunk while driving a Toyota Hilux and that led to the accident. This was proven by a test to measure the level of alcohol in his body.

“The result of the alcohol test on the perpetrator was positive and he admitted it was true that he and his friend were drunk while driving the car,” he said.