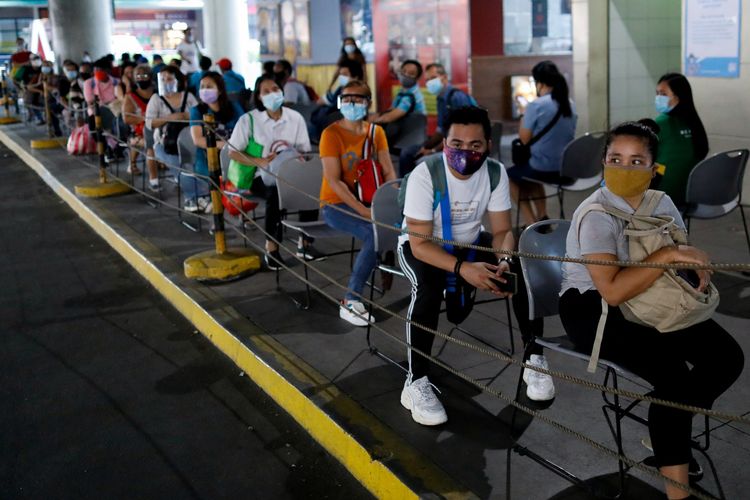 Lihat Foto
Months-long coronavirus lockdowns sent the Philippine economy into a recession after the country experienced its biggest quarterly contraction on record.(REUTERS/ELOISA LOPEZ)

MANILA, KOMPAS.com – Months-long coronavirus lockdowns sent the Philippines into a recession after the country experienced its biggest quarterly contraction on record.

The economic results came as a result of the world’s longest stay-at-home orders to slow Covid-19 virus transmissions in the Southeast Asian nation.

The Philippines is not the only country with a battered economy as the coronavirus pandemic has devastated economies globally.

It followed a revised 0.7 percent contraction in the first three months of the year and marked the biggest reduction in economic activity since records began in 1981 during the Ferdinand Marcos dictatorship. It is the country's first recession in three decades.

The outlook for the archipelago is bleak, with the number of coronavirus infections surging past 115,000 this week — a more than fivefold increase since early June when the economy-crippling restrictions were eased.

"Without doubt, the pandemic and its adverse effect on the economy are testing the economy like never before," said acting Socioeconomic Planning Secretary Karl Chua.

"But unlike past crises, the Philippines is now in a much stronger position to address the crisis."

As health workers struggle to cope with the influx of patients, more than 27 million people in Manila and four surrounding provinces on the main island of Luzon — which accounts for more than two-thirds of the country's economic output — went back into a partial lockdown for two weeks on Tuesday to help ease the strain on hospitals.

Read also: Lockdown in the Philippines Reinstated as Health Workers Warn of a Losing Covid-19 Battle

But President Rodrigo Duterte, who was reluctant to tighten restrictions after millions lost their jobs in the first shutdown, has warned the country cannot afford to remain closed for much longer.

"The problem is we don't have money anymore. I cannot give food anymore and money to people," Duterte said Sunday.

The country's economic woes have been exacerbated by a drop in remittances from the legion of Filipinos working abroad who typically send money to their families every month, which fuels consumer spending — the main driver of growth.

Remittances dropped 6.4 percent in the first five months, compared with the same period last year, according to the central bank.

Thousands of seafarers, cleaners and construction workers have lost their jobs and returned home.

"It will be a rough road to recovery as trade-offs between economic recovery and health will remain a big challenge to both the private and public sectors," said Emilio Neri, lead economist at Bank of the Philippine Islands.

Asian Markets Swing as US Inflation...
Comments
There are no comments
Comment wisely and responsibly. Comments are entirely the responsibility of the commentator as regulated in the ITE Law
Thank You! We have received your report. We will remove comments that conflict with the Community Guidelines and the ITE Law.