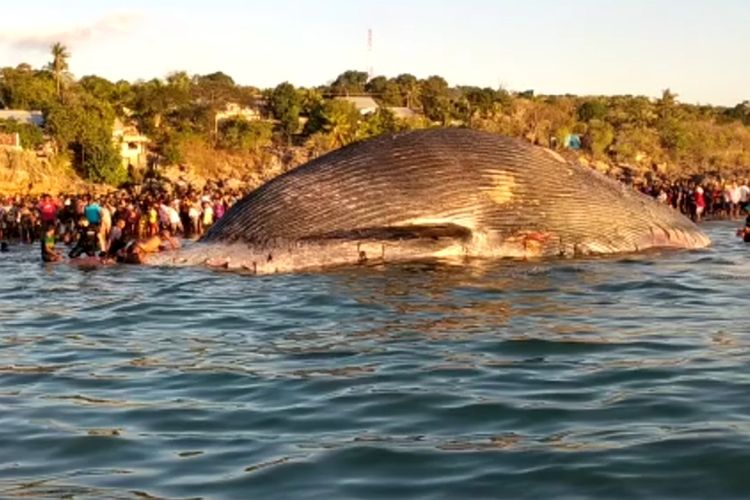 KUPANG, KOMPAS.com – A dozen whales beached themselves in Indonesia's East Nusa Tenggara last July. They all died, according to the Kupang Water Area Conservation Agency (BKKPN).

“The majority of the beaching incidents happened on July 30, when 11 pilot whales hit the shores of the Sabu Raijua regency.”

Ikram added that 10 of the cetaceans that beached on July 30 died instantly.

“The local people attempted to help the 11th [pilot whale] and actually managed to bring it to the open seas. But the marine mammal was found dead the next day after it beached again,” he recalled.

Ikram noted that beaching is a natural phenomenon, not a byproduct of poaching or other manmade causes.

“Various species of whales and other marine mammals often converge onEast Nusa Tenggara's waters, particularly the Sawu Sea, as it is rich in plankton and other marine life that make up a large part of their diet,” he said.

“The whales followed the currents from deepwater to shallower waters near the beach, as the ocean currents brought plankton and other food sources there.”

Ikram added that there is plenty of evidence about the whales’ plight.

“Forensic evidence of the [whale’s] remains showed that their bodies scraped the reefs, which means they were trapped in shallow water,” he noted. “This means that it was too late for the whales to head to deeper waters, and so they were trapped on the beach at low tide.”

Ikram urged the public to inform the authorities if another whale washed up on the beach, so he and other officials can promptly rescue the cetaceans.

Indonesia Child Deaths Blamed on Syrup...
Comments
There are no comments
Comment wisely and responsibly. Comments are entirely the responsibility of the commentator as regulated in the ITE Law
Thank You! We have received your report. We will remove comments that conflict with the Community Guidelines and the ITE Law.