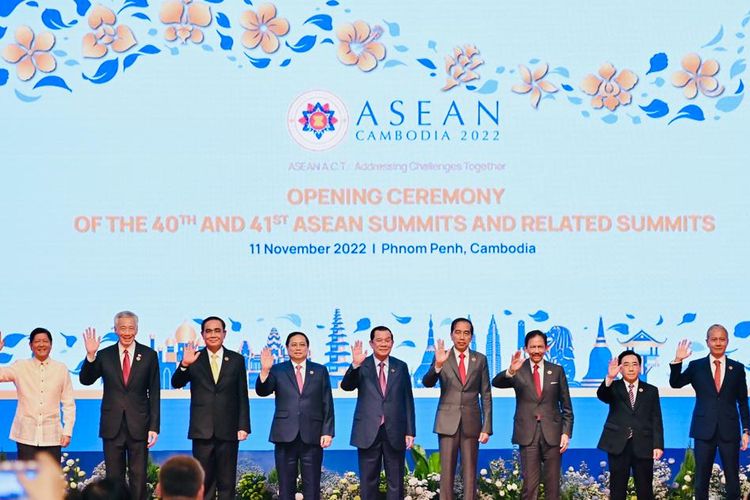 Lihat Foto
(File) Indonesia's President Joko Widodo (4th, right) and other ASEAN leaders pose for a group photo during the opening ceremony of the 41st ASEAN Summit in Phnom Penh, Cambodia on Friday, November, 2022. Indonesia has been named next year's ASEAN chair and will adopt the theme ASEAN Matters: Epicentrum of Growth.(Dokumentasi/Sekretariat Presiden)

BANGKOK, KOMPAS.com - A regional envoy tasked with solving the Myanmar crisis will attend an informal meeting in Thailand on Thursday, Dec. 22, Cambodia said, with a Thai government source indicating the junta's foreign minister would attend.

The Thailand meeting comes shortly after the United Nations Security Council adopted its first resolution on Myanmar, demanding "an immediate end to all forms of violence".

The Association of Southeast Asian Nations (ASEAN) has so far led diplomatic efforts to resolve the turmoil that has gripped Myanmar since the military seized power last year.

However, there has been little progress on a "five-point consensus" agreed upon with the junta in April 2021, with the regional bloc struggling to come up with ways to enforce it.

Also read: ASEAN-EU Summit: Jokowi Says No One Can Dictate to Others

Cambodia's foreign ministry said Prak Sokhonn, its top diplomat and special envoy, would participate in a meeting in Bangkok at the request of his Thai counterpart, Don Pramudwinai.

"During the informal consultation, the participants are expected to have a frank and candid deliberation on how to accelerate the progress in the implementation of the Five-Point Consensus (5PC) on Myanmar," the ministry said in a statement.

It would be his first known trip abroad since visiting China in March.

The Thai foreign ministry did…

Covid-19: Indonesia May Lift Restrictions by End of 2022