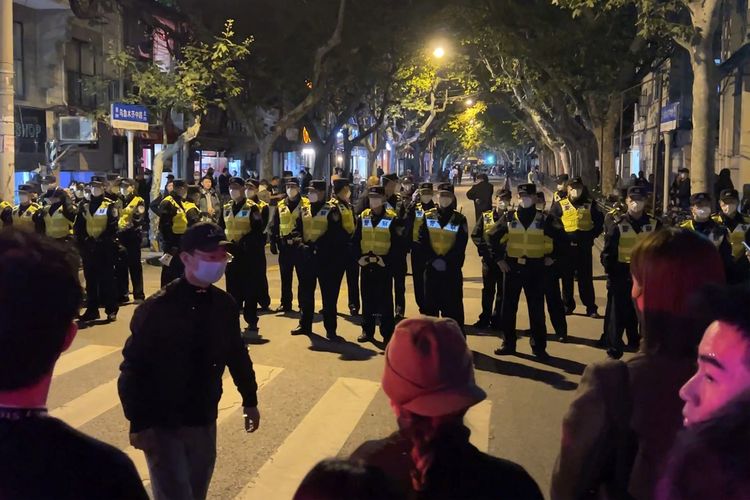 Lihat Foto
Chinese police officers block off access to a site where protesters had gathered in Shanghai on Sunday, Nov. 27, 2022. Protests against China's strict zero-Covid policies resurfaced in Shanghai and Beijing on Sunday afternoon, continuing a round of demonstrations that have spread across the country since a deadly apartment fire in the northwestern city of Urumqi led to questions over such rigid anti-virus measures.(AP PHOTO)

China's top security body issued a warning late on Tuesday, Nov. 29, proclaiming that authorities would not shy away from a "crackdown" on "the infiltration and sabotage activities of hostile forces", while civilian authorities stated that "illegal and criminal acts that disrupt social order" would not be accepted.

The movement is the biggest wave of civil disobedience China has seen since Tiananmen in 1989.

A video published on Twitter showed dozens of riot police in hazard suits advancing in formation with shields over their heads. The video also showed objects being thrown at them as they step over what appeared to be torn-down lockdown barriers. Several people in handcuffs were apparently taken by police to an unknown location.

A second video also showed people throwing objects at the police. In another clip, a tear gas canister lands among a small crowd in a narrow street, with people running away from the fumes.

Despite its draconian anti-pandemic policies, China has been posting record numbers of Covid-19 cases daily when the clashes erupted in Shanghai, Beijing, and elsewhere.

Due to China's harsh control…