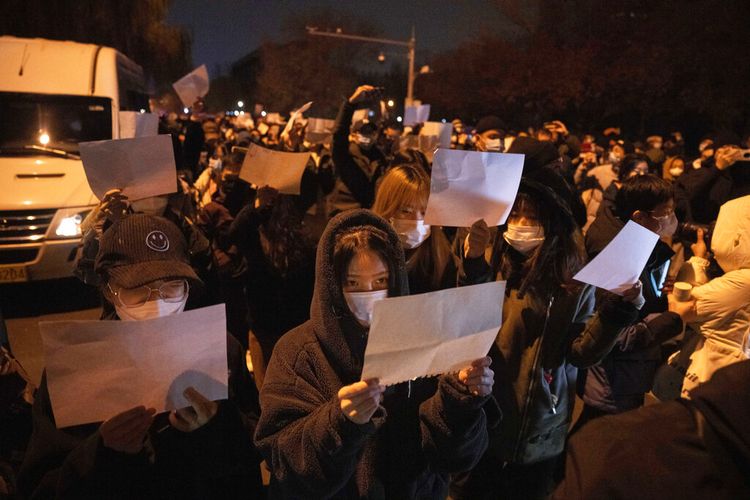 KOMPAS.com - Protesters angry at China's strict lockdowns on Sunday, Nov. 27, called for President Xi Jinping to quit, in a sign of widening public frustration at the country's zero-Covid policy.

Demonstrators in the commercial capital, Shanghai, could be heard chanting, "Xi Jinping! Step down! CCP (Chinese Communist Party)! Step down!"

"I'm here because I love my country, but I don't love my government... I want to be able to go out freely, but I can't. Our Covid-19 policy is a game and is not based on science or reality," said one protester, Shaun Xiao.

Protesters were seen holding up blank sheets of paper at rallies, symbolizing their protest against Chinese censorship.

China reported a fifth straight daily record of new local cases of 40,052 on Monday, up from 39,506 a day earlier.

At least two protesters were detained on Monday, Nov. 28, the AFP news agency cited their reporters as having noticed police officials leading people away from a protest site in Shanghai.

Protesters rallied amid heavy police presence, while law enforcement officials barred people passing by from taking pictures or recording videos, according to AFP.

Several people were detained and taken away by bus on Sunday as well.