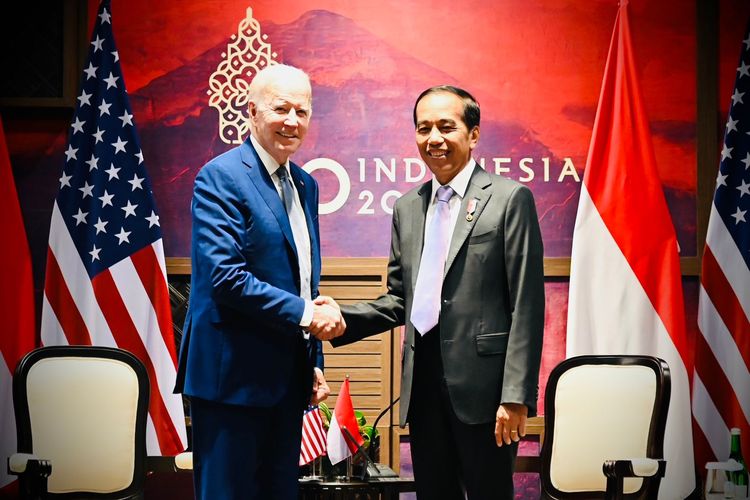 NUSA DUA, KOMPAS.com – Indonesia’s President Joko “Jokowi” Widodo met his US counterpart Joe Biden before the start of the Group of Twenty (G20) Summit on the resort island of Bali Monday, Nov. 14.

Held at the Apurva Kempinski Bali, the main venue of the G20 Summit, President Biden expressed hope that the cooperation between the US and Indonesia will be strengthened by developing a new partnership in renewable energy for a better future.

“We’ve finalized a new partnership, through the Millennium Challenge Corporation, to invest nearly $700 million in developing high-quality transportation and infrastructure here in Indonesia,” Biden said as quoted as saying by whitehouse.gov.

He also said that both countries have collaborated to protect the people of both countries, including improving the ability to fight infectious disease with the launch of a historic pandemic fund.

The meeting was cordial as Biden was thanking Jokowi for Indonesia’s hospitality and support of the G20. “You’ve done a wonderful job thus far,” Biden told Jokowi.

“Well, as I told you, Mr. President, I don’t think I’m going home…you had me staying on the beach,” Biden said with a laugh.

Jokowi also expressed his appreciation for Biden’s attendance at the G20 Summit. “I really appreciate your presence here. And tomorrow, we will discuss and start the G20 Summit,” Jokowi said during the meeting, which was live-streamed by the Presidential Secretariat’s YouTube channel.

“I hope that the G20 Summit will be able to produce complete cooperation that will help global economic recovery,” Jokowi added.

Indonesia will hand over the G20 Presidency to India at the closing ceremony.