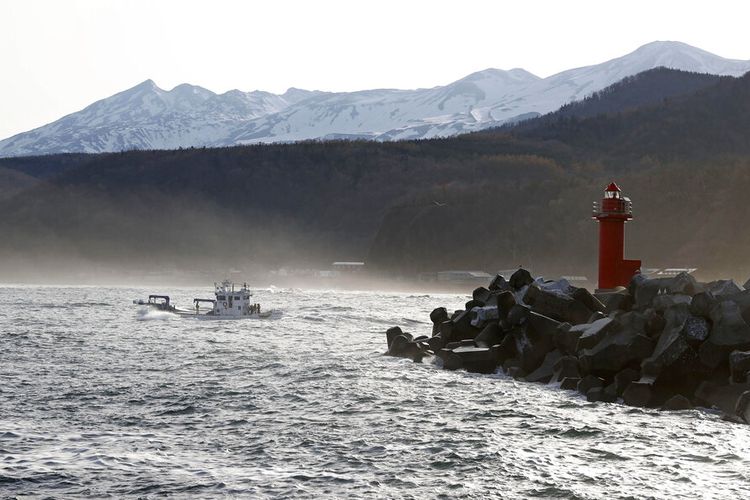 KYODO NEWS via AP PHOTOA fishing boat leaves a port in Shari, in the northern island of Hokkaido Sunday, April 24, 2022. The Japanese Coast Guard said Sunday that their helicopters found four of the 26 people on a tour boat, which left the port and went missing since the day before. (Kyodo News via AP)

TOKYO, KOMPAS.com — The Japanese Coast Guard said Sunday April 24 that rescue helicopters found seven of the 26 people from a tour boat missing in the frigid waters of northern Japan since the day before, but their conditions are unknown.

Rescuers found four people near the tip of Shiretoko Peninsula earlier Sunday and then three more people in the same area a few hours later, but the coast guard said it could not confirm whether they were rescued alive. NHK public television said they were unconscious.

The coast guard said all seven people were found in the same area near the tip of the peninsula north of where the boat sent a distress call on Saturday April 23. The location is known as a difficult place to maneuver boats because of its rocky coastline. The same tour boat had an accident there last year.

Footage on NHK showed one of the rescued people arriving on a helicopter and being transferred to an ambulance on a stretcher, while rescuers held up blue plastic shields for privacy.

The boat carrying 24 passengers and two crew members had gone missing after sending a distress call Saturday, saying it took on water and was beginning to sink.

The 19-ton Kazu 1 made an emergency call in the early afternoon, saying the ship's bow had flooded and it was beginning to sink and tilt while traveling off the western coast of Shiretoko Peninsula near the northern island of Hokkaido, the coast guard said.

The tour boat has since lost contact, according to the coast guard. It said the boat was carrying 24 passengers, including two children, and two crew.

Average April sea temperatures in Shiretoko National Park are just above freezing.
An official for the vessel's operator, Shiretoko Pleasure Cruise, said he could not comment because he had to respond to calls from worried families of the passengers.