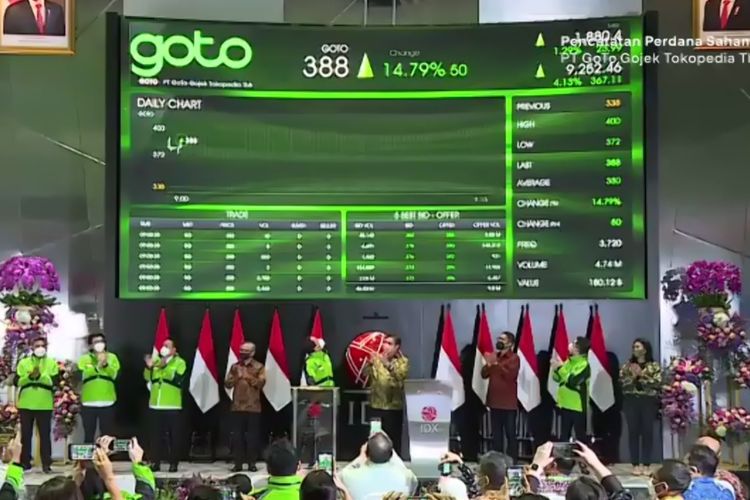 KOMPAS.com – Indonesia’s biggest tech firm GoTo soared as much as 23 percent in its market debut on Monday, April 11 after the company raised $1.1 billion in a keenly watched IPO, fueling expectations of more offerings to come from the sector in Southeast Asia’s largest economy.

The initial public offering (IPO) is the world’s fifth-largest this year, Refinitiv data showed and went forward despite many IPOs across the globe being pulled due to the Russia-Ukraine war and rising interest rates.

PT GoTo Gojek Tokopedia Tbk was formed by last year’s merger of ride hailing-to-payments company Gojek and e-commerce leader Tokopedia, with its businesses straddling millions of small and mid-sized firms across the archipelago.

“There was no perfect timing for this IPO, but our focus was on Indonesia, with a local investor audience,” GoTo’s CEO Andre Soelistyo, a former private equity banker who steered Gojek’s push into consumer services, told reporters.

GoTo’s shares rose as high as 416 rupiah minutes after the start of trade, compared with the 338 rupiah IPO price. Sold only to investors in Indonesia, unlike most other domestic offerings, the shares ended at 382 rupiahs, up 13 percent.

The strong listing will boost tech giants backing GoTo, including SoftBank Group’s Vision Fund 1 and Alibaba Group Holding Ltd, which have been battered by the global market rout since late 2021.

It also affirms the attractiveness of Indonesia’s $70 billion digital markets, where record venture funding is creating a wave of startups.

GoTo became Indonesia’s third most valuable listed firm at $31.6 billion, along with Telkom Indonesia, and after Bank Central Asia and Bank Rakyat Indonesia.