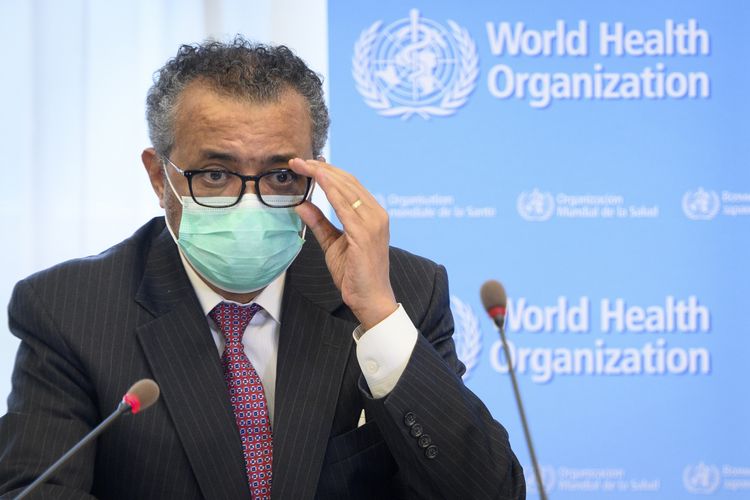 Lihat Foto
Tedros Adhanom Ghebreyesus, Director General of the World Health Organization (WHO) speaks during a bilateral meeting with Swiss Interior and Health Minister Alain Berset, not pictured, before signing a BioHub Initiative with a global Covid-19 Pathogen repository in Spiez laboratory on the sideline of the opening of the 74th World Health Assembly, WHA, at the WHO headquarters, in Geneva, Switzerland, Monday, May 24, 2021. (Laurent Gillieron/Keystone via AP)(KEYSTONE/LAURENT GILLIERON via AP PHOTO)

KOMPAS.com - The World Health Organization (WHO) said Monday that while the number of new Covid-19 cases has fallen steadily for seven straight weeks.

Speaking from the agency's headquarters in Geneva, WHO Director-General Tedros Adhanom Ghebreyesus said the overall decline in new cases, the longest since the pandemic began, was certainly welcome news. But he said deaths overall were not falling as quickly and declined only slightly last week.

Tedros said the decline in cases also masks the fact that the virus continues to spread and kill in regions such as Africa, which has limited access to vaccines and treatments such as oxygen and diagnostic equipment.

He cited a recent study in the British medical journal The Lancet showing Africa with the highest global mortality rate among critically ill Covid-19 patients, despite it having fewer reported cases than most other regions.

Tedros said that available evidence suggests new variants have substantially increased transmission globally, especially in areas with low vaccination rates. The risks have increased for people who are not protected, which is most of the world's population, he said. “Right now, the virus is moving faster than the global distribution of vaccines.”

The WHO chief expressed his gratitude to the leaders at the G-7 summit last week, who pledged 870 million doses of vaccine through the WHO-administered global vaccine cooperative, COVAX.

He said while those donations would be a big help, the world needed more vaccines, and faster. Tedros said to end the pandemic, the shared goal must be to vaccinate at least 70 percent of the world's population in the next year. That will take 11 billion doses of vaccine, and “the G-7 and G-20 can make this happen.”