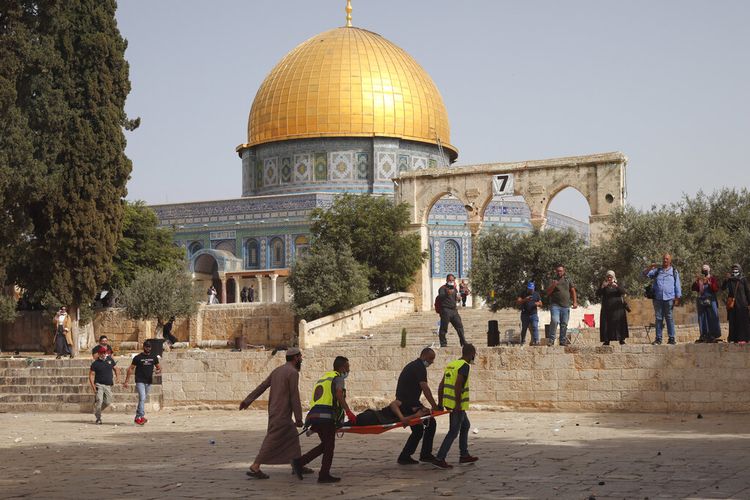 Lihat Foto
Palestinians evacuate a wounded man during clashes with Israeli security forces in front of the Dome of the Rock Mosque at the Al Aqsa Mosque compound in Jerusalem's Old City Monday, May 10, 2021. Israeli police clashed with Palestinian protesters at a flashpoint Jerusalem holy site on Monday, the latest in a series of confrontations that is pushing the contested city to the brink of eruption. Palestinian medics said at least 180 Palestinians were hurt in the violence at the Al-Aqsa Mosque compound, including 80 who were hospitalized. (AP PHOTO/MAHMOUD ILLEAN)

JAKARTA, KOMPAS.com – Indonesia is set to bring the Palestinian conflict to the international stage, as tensions escalated between Israel and Palestine after Israeli security forces forcefully evicted Palestinians from the Al-Aqsa Mosque and their residences in East Jerusalem.

“Indonesia has proposed to convene a special meeting on the Palestinian-Israeli conflict to the Organization of Islamic Cooperation [OKI] and the Non-Bloc Movement,” said Indonesian Minister of Foreign Affairs Retno Marsudi on Wednesday.

“We also urge the United Nations Security Council to take concrete action in stopping the violence and provide justice and protection to Palestine. The rights of the Palestinian people have been trampled on by Israel for too long.”

Retno added that Indonesia will support the Palestinian nation and people in their struggle for statehood. “Indonesia also condemns the escalation of violence that has killed dozens of civilians in the embattled Palestinian territory of the Gaza Strip,” she asserted.

“Indonesia is maximizing its efforts to fight for Palestine, including through the
Committee on the Exercise of the Inalienable Rights of the Palestinian People (CEIRPP), an organization founded by the United Nations to advocate Palesitinian rights.”

The Israeli campaign of missile strikes against the Gaza Strip has killed 40 people from both sides, and injured hundreds of others.

The unrest at the Al-Aqsa Mosque, which stemmed from Israeli efforts to evict Palestinians from their homes in the East Jerusalem district of Sheikh Jarrah, has left more than 200 Palestinians injured at the sacred site.

The Israeli crackdown has received international criticism, as the United States, Russia and other countries conveyed their concerns about the situation to the Israeli government.