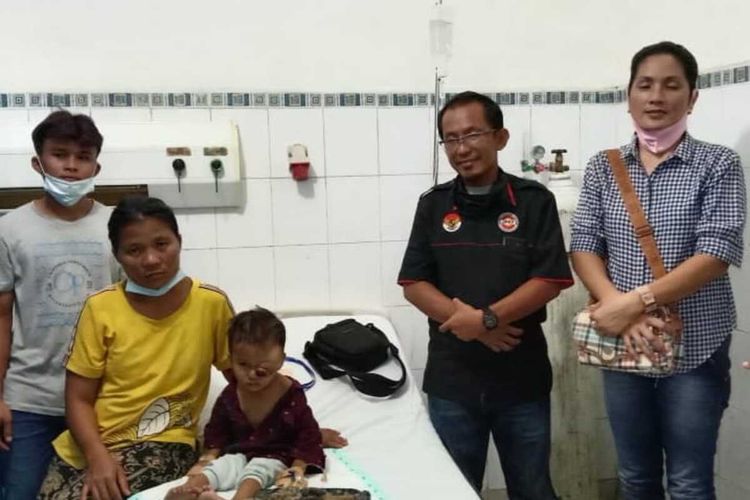 Lihat Foto
Rudin Duha, a 2.5-year-old toddler boy from South Nias, suffered from a tumor in his left eye. A lump the size of a tennis ball makes his condition very apprehensive and until now he has not received intensive care due to constraints on medical costs.(KOMPAS.com/HENDRIK YANTO HALAWA)

GUNUNGSITOLI CITY, KOMPAS.com -  A toddler from a rural area in Indonesia has yet received intensive treatment despite he has a tennis ball-sized tumor growing from his right eye.

Rudin Duha, who will turn three in October, has to deal with multiple fevers in a week.

His parents, Markus Amabuula Duha and Siguni Sarumaha said that their child has been suffering from a tumor that is made up of blood vessels since he was about two months old. To remove the tumor, they said, there is no other way than a surgery. But, the family couldn't afford it.

"Where does the money for my child's surgery come from? I do not have enough money and my wife does not work," said Markus at the dr. Thomsen Regional Hospital in Nias, North Sumatera on Wednesday, April 28.

The source of income of the family who lives in Hilisao'otoniha village in Teluk Dalam district solely depends on Markus, a penniless farmer. They could not pay for the government universal's healthcare insurance program or BPJS Kesehatan.

Regardless, BPJS Kesehatan, unfortunately, cannot cover the cost of surgery for their son.

"I cannot even pay BPJS bills. I have debts everywhere and I cannot borrow more money since my ongoing debts have not been paid," Markus continued.

In 2018, a small lump appeared near the corner of Rudin's eye. His parents started looking for answers by getting a check-up in a hospital. The doctor then told them the scans revealed a tumor in their child’s eye.

Markus and his wife then…

Delta Plus Covid Variant Not Detected...
Comments
There are no comments
Comment wisely and responsibly. Comments are entirely the responsibility of the commentator as regulated in the ITE Law
Thank You! We have received your report. We will remove comments that conflict with the Community Guidelines and the ITE Law.