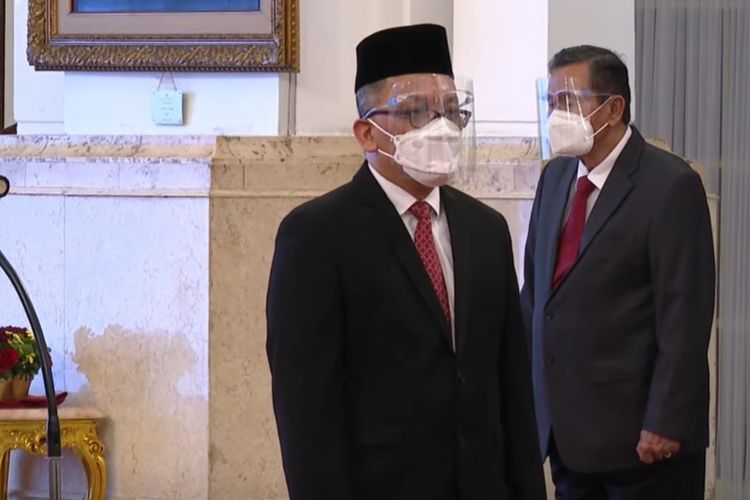 Lihat Foto
Laksana Tri Handoko has been appointed as the National Research and Innovation Agency head during a ceremony held at the State Palace on Wednesday, April 28, 2021. Previously, Laksana served as the Indonesian Institute of Sciences (LIPI) head. (YouTube/Sekretariat Presiden) JAKARTA, KOMPAS.com – President Joko Widodo has tinkered with his cabinet once again, as he merged two ministries in an effort to streamline the cabinet.

Indonesia is the latest nation to ban flights from India, as the country’s uncontrolled Covid-19 outbreak rendered the it off limits.

And Indonesian state-owned pharmaceutical company Kimia Farma’s credibility took a hit, after the police arrested a number of employees from one of its subsidiaries in North Sumatra for reusing old rapid tests kits. This and more on Indonesia Highlights:

YouTube/Sekretariat Presiden Indonesia's President Joko Widodo has appointed Bahlil Lahadalia as the new minister of Investment and Investment Coordinating Board (BKPM) head in a ceremony held at the State Palace on Wednesday, April 28, 2021. Bahlil previously served as BKPM head before the two institutions have previously also been merged.

Indonesia’s President Joko “Jokowi” Widodo inaugurated two ministers and head of the National Research and Innovation Agency (BRIN) at the State Palace in the capital Jakarta on Wednesday, April 28.

It was reported that the previous minister of Research and Technology/BRIN head, Bambang Brodjonegoro, had resigned from his post.

Investment Coordinating Board (BKPM) head Bahlil Lahadalia has been named as the new minister of Investment and BKPM head after the two institutions have previously also been merged.

The appointment was based on the presidential decree No. 72/2021 on the formation and remuneration and replacement of several state ministers in President Jokowi's cabinet for the 2019-2024 term.

Borneo Skeleton, 31,000 Years Old, Thought...
Comments
There are no comments
Comment wisely and responsibly. Comments are entirely the responsibility of the commentator as regulated in the ITE Law
Thank You! We have received your report. We will remove comments that conflict with the Community Guidelines and the ITE Law.