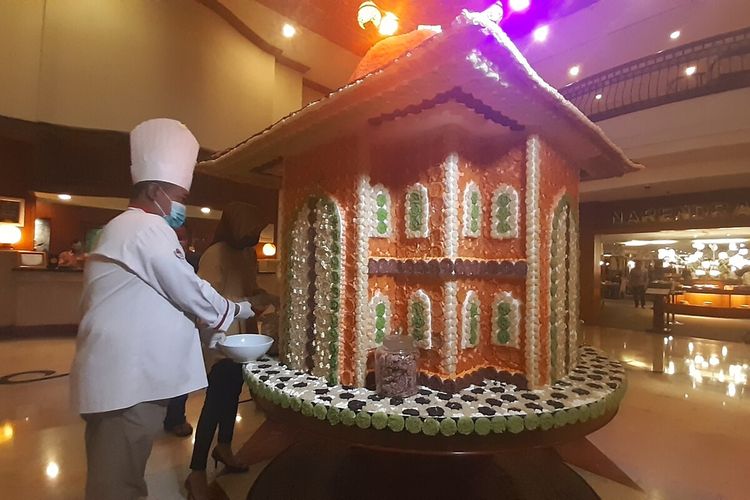 Lihat Foto
A mosque miniature made from traditional Indonesian snack rengginang is installed in the lobby of The Sunan Hotel Solo, Central Java.(KOMPAS.com/LABIB ZAMANI) SOLO, KOMPAS.com - If one visits the Sunan Hotel in the city of Solo at Indonesia's Central Java province, one might be fixated by a colorful scale-model mosque at the lobby. At first glance, it might be mistaken for a gingerbread structure.

But a closer look of the miniature house of worship shows that the mosque's building blocks came from an ingredient more typical of Indonesia, namely traditional rengginang rice cakes.

Sunan Hotel General Manager Retno Wulandari stated that crafting the rengginang into a miniature mosque and installing it at the lobby, is designed to draw guests observing the holy Muslim month of Ramadan.

"The [rengginang mosque] is fast becoming an icon [of Solo] where guests can take advantage of it as a background for their selfies," she said of the 200 by 180 centimeter structure.

"The miniature mosques requires seven days to make and uses up to 20 kilograms of rengginang. We used white chocolate as an adhesive to turn the rice crackers into the scale-model mosque inspired by their full-scale counterparts throughout Java."

Retno added that the design of the miniature mosque "intends to evoke the atmosphere of the holy month [of Ramadan]."

This can be seen in the use of food coloring to make multi-colored hues such as orange, green and black that juxtaposes with the rice crackers' basic white color.

Rengginang is a traditional Indonesian rice cracker, made of cooked glutinous sticky rice that is seasoned with spices, molded into a flat and rounded shape then sun-dried. It is then deep fried in cooking oil to produce a thick, crispy rice cracker.

The delicacy is also distinguished…

WHO Approves Sinovac Covid Vaccine for...
Comments
There are no comments
Comment wisely and responsibly. Comments are entirely the responsibility of the commentator as regulated in the ITE Law
Thank You! We have received your report. We will remove comments that conflict with the Community Guidelines and the ITE Law.