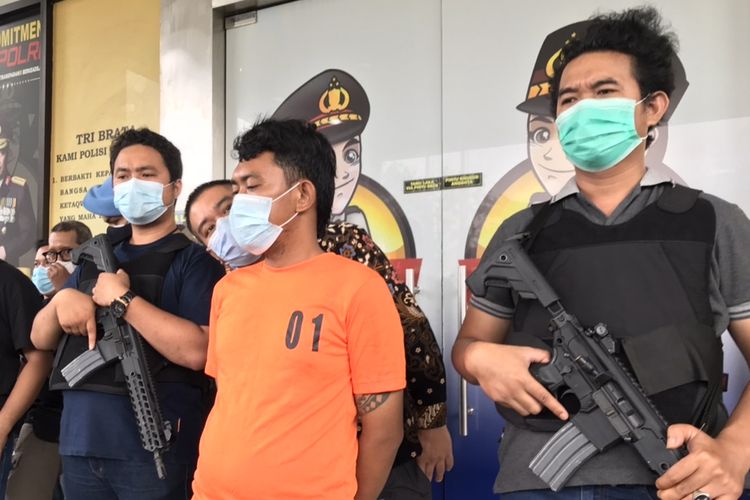 Lihat Foto
Police in South Tangerang with Wahyuapriansyah, the prime suspect behind the murder of KEN, a German citizen and his wife NM, at a press conference on Sunday (14/3/2021)(KOMPAS.com/WAHYU ADITYO PRODJO)

SOUTH TANGERANG, KOMPAS.com – The Indonesian police has arrested the suspect in the murders of a German national and his Indonesian wife who were found dead at their home in the city of South Tangerang, Banten province last Friday.

The police announced that a Criminal Investigation Agency [Bareskrim] team of detectives from the South Tangerang Police Department nabbed Wahyuapriansyah in the Tambun district of the city of Bekasi in West Java .

“He admitted to killing his victims, 84-year old KEN and his wife, 53-year old NS, during questioning. He also said that he has no suspects.” Iman added that the 22-year old laborer’s actions was motivated by revenge.

“Wahyuapriansyah said the victims verbally insulted him and subjected him to slights. These included being physically struck twice by KEN, while NS often gestured at him with her feet,” Iman asserted.

“[KEN and NS’] actions are possibly in connection to a number of errors on Wahyupriansyah’s part, when he was renovating their home in South Tangerang’s Serpong district from February 22 until he was dismissed on March 8. That was how he knew the layout of their place.”

KOMPAS.com/Muhamad Isa Bustomi The house in Giri Loka housing complex in the BSD housing development in Serpong, South Tangerang, where a German citizen and his Indonesian wife were found murdered on Saturday, (13/3/2021)

Carrying out the murders

Investigators noted that Wahyuapriansyah arrived at his victims’ house at the Giri Loka housing complex in Serpong at 10.30 pm last Friday. They added that he broke in by jumping the fence, then entered the house through a balcony on the second floor.

“[Wahyuapriansyah] knew that the second…

Dutch Citizen Deported from Indonesia’s Bali...
Comments
There are no comments
Comment wisely and responsibly. Comments are entirely the responsibility of the commentator as regulated in the ITE Law
Thank You! We have received your report. We will remove comments that conflict with the Community Guidelines and the ITE Law.

Ayu Kembarati: Indonesian Cancer Survivor Who Dedicates Her Life to Community in Australia