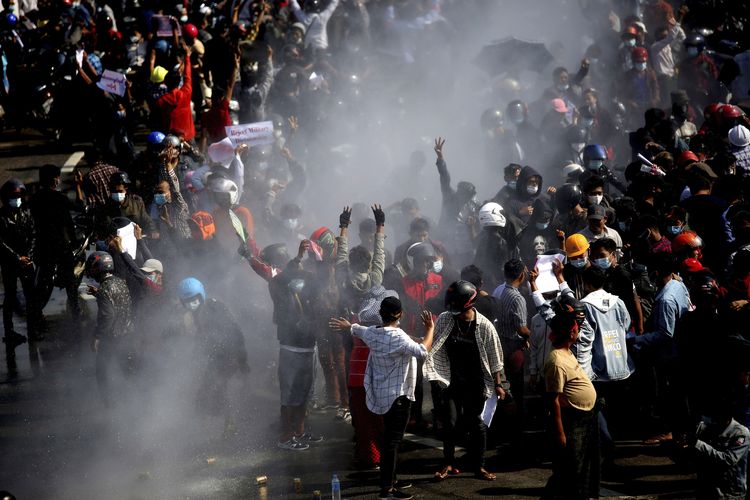 AP PHOTOProtesters are sprayed with water fired from a police truck's water cannon in Naypyitaw, Myanmar on Monday, Feb. 8, 2021. Tension in the confrontations between the authorities and demonstrators against last week's coup in Myanmar boiled over Monday, as police fired a water cannon at peaceful protesters in the capital Naypyitaw.(AP Photo)
Writer Dezy Rosalia Piri
|
Editor Dezy Rosalia Piri

KOMPAS.com - Thousands of people continued to rally in Myanmar despite increasing violence from the security forces.

The military, however, has been unable to quell anti-coup protests and a civil disobedience campaign.

Citizens continue to protest against the military coup in Myanmar, with numerous demonstrations taking place on Sunday across the Southeast Asian nation.

More protests are planned for Monday to call for the release of Aung San Suu Kyi, the country's ousted civilian ruler. The Nobel Peace laureate was detained by the military junta after it overthrew the elected government on February 1.

On Saturday, at least two people were killed in protests in Mandalay, according to media reports. At least six others were wounded when security forces opened fire on the crowds.
Facebook banned a military-run page for inciting violence, the social media company announced on Sunday.

"This morning [Sunday], in line with our global policies, we removed the Tatmadaw True News Information Team Page from Facebook for repeated violations of our Community Standards prohibiting incitement of violence and coordinating harm," a Facebook official wrote, referring to Myanmar's armed forces. 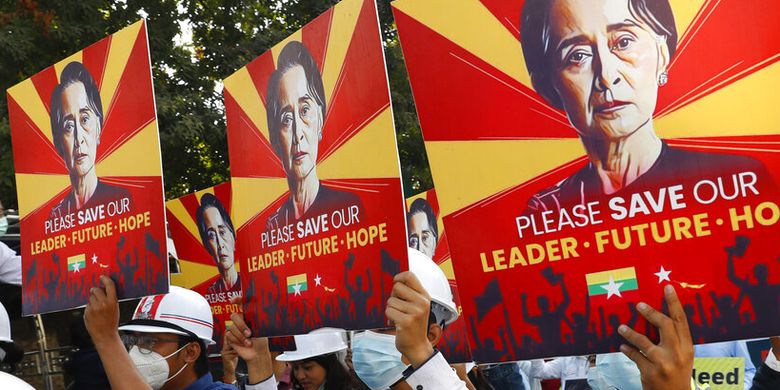 Suu Kyi's National League for Democracy (NLD) party called the violence by security forces in Mandalay a crime against humanity.

Authorities have warned protesters against holding further rallies, saying that by planning a big demonstration on Monday, they were inciting anarchy and pushing young people towards a path of confrontation "where they will suffer the loss of life."

The warning failed to deter protesters, who vowed to continue to demand the restoration of democracy.

"The number of people will increase. ... We won't stop," protester Yin Nyein Hmway said in Yangon.

An increasing number of young people are participating in pro-democracy protests in Myanmar.

"As young people have our dreams, but this military coup has created so many obstacles," said Ko Pay in Yangon.

"That's why we come out to the front of the protests."

The US Secretary of State Antony Blinken said the US stands with "the people of Burma as they demand the restoration of their democratically elected government."

He also said the US would take "firm action" against Myanmar authorities' violent crackdown on those opposing the military coup, in a tweet.

On Sunday, Germany's Foreign Ministry repeated its demands "to end violence against demonstrators and instead to open up dialogue." The ministry also called for the immediate release of Suu Kyi and President Win Myint.

EU foreign affairs chief Josep Borrell slammed the use of force by the military and security forces and called on them to immediately stop violence against civilians.

The bloc's Foreign Affairs Council is to discuss the latest events in Myanmar on Monday and "take appropriate decisions," Borrell said.

State Department spokesman Ned Price said the United States was "deeply concerned" by the violence. UN Secretary-General Antonio Guterres said the lethal force was unacceptable.
In a statement released on Sunday, Myanmar's Foreign Ministry reiterated the junta's stance that the takeover was constitutional.

The ministry lashed out at some embassies and foreign governments, calling their statements "tantamount to flagrant interference in internal affairs of Myanmar."

The Foreign Ministry claimed that, despite "unlawful demonstrations, incitements of unrest and violence, the authorities concerned are exercising utmost restraint through minimum use of force to address the disturbances," adding that officers were maintaining public safety in line with domestic laws and international practices.