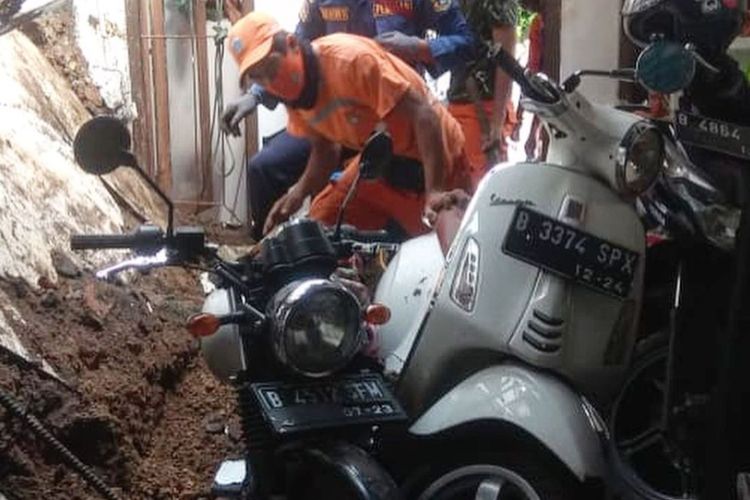 Lihat Foto
A landslide in South Jakarta's Jagakarsa neighborhood in the early hours of Friday (5/2/2021). The landslide is one of two to hit South Jakarta, along with another that his the Pejaten district (Dok. BPBD DKI Jakarta)

JAKARTA, KOMPAS.com – Jakarta residents have to contend with other natural disasters during the annual rainy season aside from floods, as a series of landslides struck the South Jakarta districts of Pejaten Timur [East Pejaten] and Jagakarsa over the past 24 hours.

No casualties were reported in the disaster,which were the first of its kind to strike Jakarta after landslides, earthquakes and volcanoes struck other parts of Indonesia over the past year.

“The homeowner, Rojali, reported that he heard a loud noise before the landslide eroded the rear of his house, including the kitchen and bathroom, on Thursday night,” said South Jakarta Fire and Rescue Services head Ahmad Sani to Kompas.com on Friday, February 5.

“However, he managed to evacuate his family from the house. We believed that heavy rains and the shifting, unstable ground caused the landslide, as well as the location of the house on a cliff facing the Ciliwung river.”

“The landslide originated at the house of a Mr. Sairi and the Lactation Foundation next door, then hit the home of a Mr. Effendi under them,” said Lenteng Agung urban village head Bayu Pasca Soengkono.

“The landslide tore a five-meter long chunk of wall that struck Effendi’s ceiling and hit his motorcycle. However, no casualties were reported.” Sairi offered to pay for damages to his neighbor following the disaster.