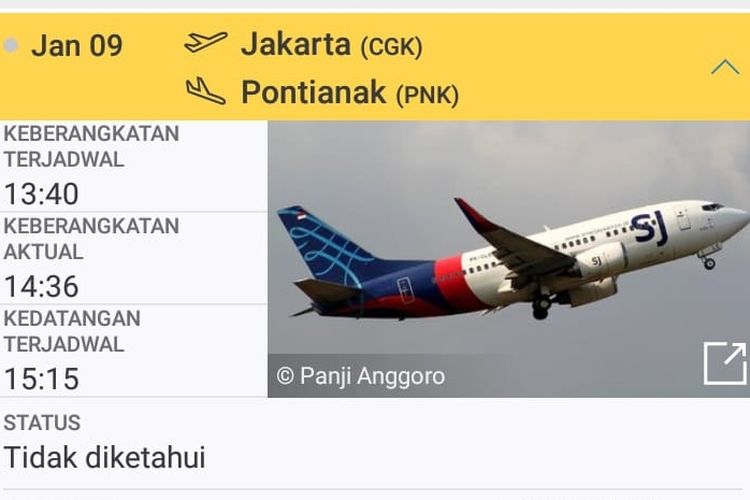 “We have verified that Sriwijaya Air call flight SJY 182 from Jakarta to Pontianak has lost contact at approximately 2.40 pm,” Indonesian Ministry of Transportation spokesperson Adita Irawati said to Kompas.com.

“Flight SJY 182 was last sighted over the Thousand Islands [off Jakarta],” She added that the Ministry of Transportation is coordinating with the National Transportation Safety Committee or KNKT and the National Search and Rescue Agency [Basarnas] to find the lost flight.

Thousand Islands Regent Djunaedi reiterated Adita. “[Sriwijaya Air Flight SJY 182] was seen to go down near Laki Island. District chiefs in the area saw the plane hit the water at 2.30 pm,” he asserted.

Djunaedi said that fishermen saw flames come out of the plane, then called for help. He added that a BASARNAS team is on their way to the estimated site of the crash.

The Planespotters.net aviation website said the plane was made in 1994. "The 737-500 airliner has flown for more than 26 years, and was part of Sriwijaya Air's fleet since May 2012", asserted Planespotters.net.

They added that the plane was used by the US-based Continental Airlines since it rolled off the production line on May 13 1994 until October 2010, when it was sold to United Airlines before it joined Sriwijaya Air's fleet.