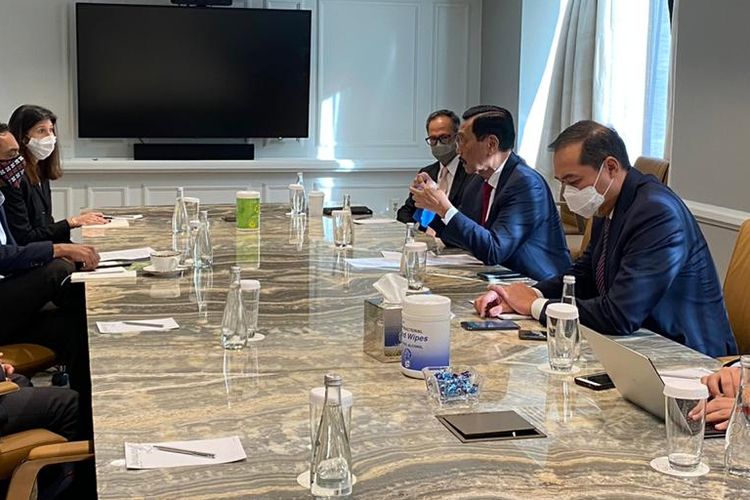 JAKARTA, KOMPAS.com – US President Donald Trump expressed his appreciation to Indonesian President Joko 'Jokowi' Widodo for the improved economic relations between their countries.

This was conveyed by Trump when receiving Indonesian Coordinating Maritime Affairs and Investment Minister Luhut Binsar Pandjaitan at the White House in Washington DC on Tuesday, November 17.

“During the meeting, Trump expressed his appreciation to President Jokowi for the improvement in economic cooperation that the two nations has so far,” said a statement from the ministry on Wednesday, November 18.

Luhut conveyed Jokowi’s appreciation to the outgoing US President who supports the cooperation between the two nations, including the recent extension of the Generalized System of Preferences (GSP) facility for Indonesia. The program provides duty-free entry into the US market for some 3,500 exports from designated beneficiary developing countries, including Indonesia. Dok KBRI Washington Indonesian Coordinating Maritime Affairs and Investment Minister Luhut Binsar Pandjaitan (3rd-left), US President Donald Trump (3rd-right), Indonesian Ambassador to the US Muhammad Lutfi (2nd-right) and other US officials pose for a photo at the White House in Washington DC on Tuesday, November 17, 2020.
“On behalf of President Joko Widodo, I’d like to express my sincere thanks and appreciation to President Donald Trump. Whatever the official results of the recent US election, our friendship needs to be maintained. Our friendship lasts forever,” Luhut said in the statement.

He also hoped that the Indonesia-US cooperation will remain strong in the new US administration next year.

“I hope the already good communication with the White House will continue after January 2021,” the senior minister said.

Also present during the vist was Indonesia’s Ambassador to the US Muhammad Lutfi, two of Trump’s advisors Jared Kushner and Ivanka Trump as well as US International Development Finance Corporation chief executive officer Adam Boehler.

Luhut was then also received by US Vice President Mike Pence in his office. The statement said that Pence offered joint vaccine production cooperation between US and Indonesian companies.

Separately, Luhut met with US National Security Advisor Robert O’Brien, discussing strategic partnerships between the two countries in the fields of defense and technology as well as exchanging views on global geopolitics.