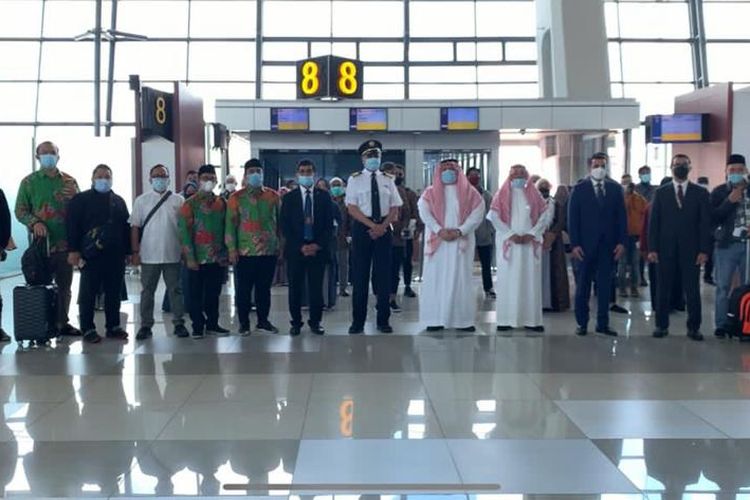 Lihat Foto
The first group of umrah pilgrims from Indonesia pose for a photo at Soekarno-Hatta International airport near Jakarta before leaving for Jeddah on Sunday, November 1, 2020. The Saudi Arabian government has lifted its temporary visa restrictions as a result of the Covid-19 pandemic. (Dokumentasi Amphuri)

The first umrah flight in seven months was operated by Saudia, carrying 253 Indonesian pilgrims. The Boeing 777-300 flight SV 817 departed Jakarta at 10.45am local time and was scheduled to arrive in Jeddah at 16.30pm local time.

“One of the health protocols is to show a negative result of PCR [polymerase chain reaction] test that must be done not later than 72 hours before departure,” Awaluddin said in a statement on Sunday, November 1.

Under the Saudi Arabian government’s latest policy, only foreign umrah aged 18-50 are eligible to perform the Islamic pilgrimage to the holy city of Mecca.

He went on to say that Soekarno-Hatta International Airport will ensure a smooth departure process for the pilgrims to follow the health protocols required by the government of Indonesia and Saudi Arabia.

“The Indonesian citizens can now perform again the umrah following the departure of the first flight from Soekarno-Hatta Airport,” he said.

“Therefore, it is important for the Soekarno-Hatta Airport to keep our commitment and honor the trust given to us by implementing the Covid-19 protocols, including those related to the health aspect,” he added.

“We are very pleased with the reopening of umrah flights from Indonesia. We call on the umrah pilgrims to be disciplined to follow the health protocols during a flight and haj. Hopefully, the umrah pilgrimage will run smoothly and everyone is in good health,” said Budi.

Based on the information provided by the Indonesian Transportation Attaché in Jeddah, currently, only Saudia is allowed to transport the umrah pilgrims from the Middle East, Europe, the United States, Asia, and Africa.

This step is part of the efforts to strictly implement the health protocols during the pandemic. The trials will take place from November-December.

The Ministry of Transportation has coordinated with the Ministry of Religious Affairs and the Saudi Arabian Aviation Authority in providing national flights from Indonesia to serve umrah pilgrims. Also, to include the airlines in the e-system booking procedures for umrah, the statement added.

Bali Can Become Location for Genomic...
Comments
There are no comments
Comment wisely and responsibly. Comments are entirely the responsibility of the commentator as regulated in the ITE Law
Thank You! We have received your report. We will remove comments that conflict with the Community Guidelines and the ITE Law.