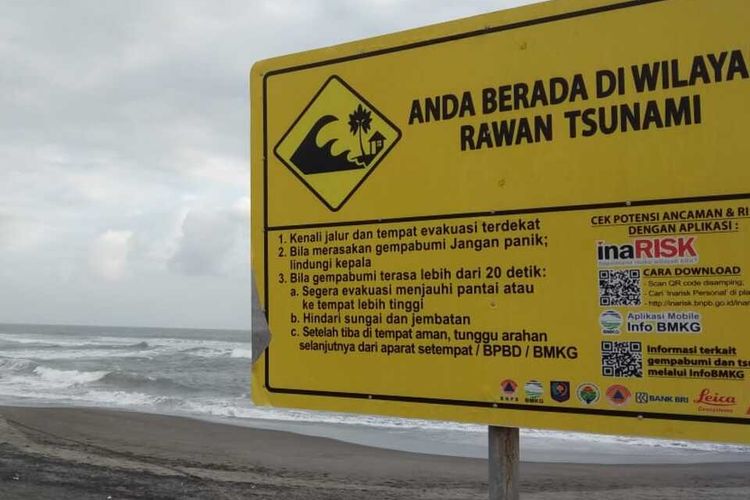 Lihat Foto
A tsunami warning board on a beach in Cianjur, West Java(KOMPAS.COM/FIRMAN TAUFIQURRAHMAN)

JAKARTA, KOMPAS.com – Local leaders and residents of the southern part of Java island have been advised to brace themselves for a major tsunami with 20-meter waves.

Indonesian People's Consultative Assembly (MPR) or Upper House chief Bambang ‘Bamsoet’ Soesatyo gave the advice after a team from Bandung Institute of Technology’s (ITB) Global Geophysics Group published on the September 17 edition of the Nature academic journal a study on the possibility that the natural disaster might occur.

“There are nine regencies and cities on the southern coast [of Java] that might be affected by the tsunami if it occurs,” Bamsoet said in a written statement on September 28.

“Of these, at least 156 villages in the Banyuwangi, Pacitan and Trenggalek areas need our attention because they will bear the brunt of the [tsunami].”

But Bamsoet warned that the authorities still have their work cut out for them. “[The drills] are needed to keep the public alert, which is indispensable as we do not have the technology that can predict when and where the tsunami will occur,” he said.

“The authorities should keep the lines of communication open to the public so as to prevent them panicking when the tsunami comes. Doing so is a first step to effective disaster management.”

Meteorology, Climatology and Geophysics (BMKG) Earthquake and Mitigation head Daryono advised the public not to panic about the ITB study. “The study is supposed to be a hypothetical disaster management exercise.”

“Unfortunately [some people] misunderstood, and…