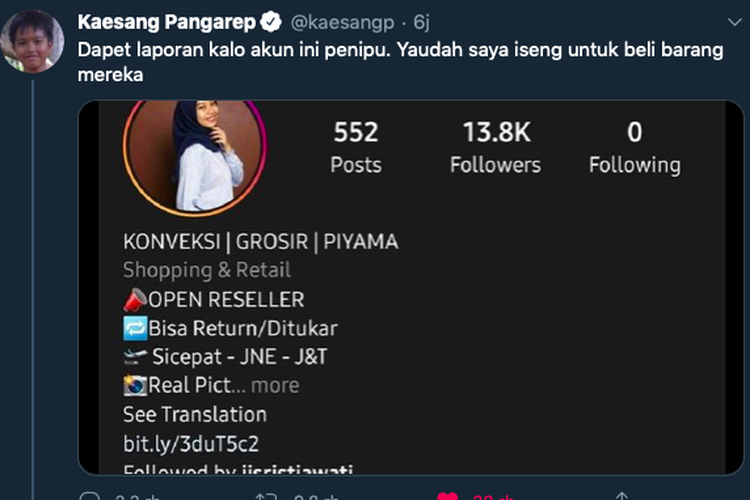 Police spokesman Brigadier General Awi Setiyono announced on September 18 that investigators from the Criminal Investigation Agency’s (Bareskrim) Cybercrimes Directorate nabbed the four, who allegedly carried out their scam on Instagram.

“Kaesang was one of a number of victims targeted by the fraudsters, who ran a fictitious auction. However, this syndicate stood out because they are underage,” Awi said.

Awi added that Bareskrim confirmed the existence of the ring in a report dated September 8, a week after Kaesang shared his suspicions about them on Twitter.

“[I] was directly messaged on Instagram by [the con artists], who went by the username Rekening Hanya BCA (@luckycatsauction) on 30 August,” Tribunnews.com quoted Kaesang as saying. “They claimed I won an auction and asked me to send the funds within 24 hours.”

“I doubted if the item could be paid for as it was over 24 hours. I also asked if the product could be paid in cash or cash on delivery [COD] once it arrived. But most of all, the account on the direct message was different from the profile.”

Awi noted that Bareskrim followed up with Kaesang’s on September 8 after he warned about the scam. “[Investigators] found @luckycatsauction to be an account ‘auctioning’ luxury goods. Their victims often transfer them money and get nothing in return.”

He added that they managed to swindle more than Rp 100 million from their victims.

“We found that the suspects live in Aceh and Medan [North Sumatra], and apprehended them in both provinces. They are currently in juvenile detention centers.”

He added that they used the proceeds to splurge on consumer goods and live luxuriously. Awi added that they are charged under Indonesia’s Electronic Transaction and Information Law and could face 12 years behind bars or Rp. 12 billion [$814,425.12] in fines.

However, Awi noted that their age is a mitigating factor. “Under [Indonesia’s] Chid Protection Laws, [the suspects] will receive counseling and be returned to their parents.”

He added that the suspects expressed remorse for trying to scam Kaesang once they realized he was President Jokowi’s son.