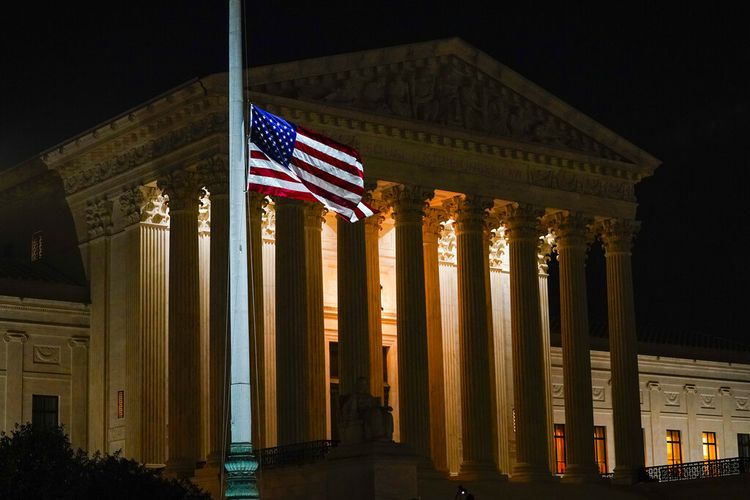 Lihat Foto
Hundreds of people turned up outside the Supreme Court to pay their respects to Justice Ruth Bader Ginsburg who passed away Friday.(Alex Brandon)

WASHINGTON, KOMPAS.com - Hundreds of people turned up outside the US Supreme Court to pay their respects to Justice Ruth Bader Ginsburg who passed away Friday.

Many were singing in a candlelight vigil and weeping together as they mourned the death of the feminist icon and champion of women's rights.

The large group of mourners packed the high court’s steps and the street across from the US Capitol in a nighttime memorial.

Dozens of people sat on the steps quietly reflecting on Ginsburg’s legacy.

Scores of memorial candles flickered in the wind along the front steps of the court as people knelt to leave bouquets of flowers, small American flags and handwritten condolence messages for Ginsburg.

Ruth Bader Ginsburg died Friday of metastatic pancreatic cancer at age 87 after 27 years on the court. Prayer candles with Ginsburg’s photo on them were also left on the steps.

Several times, dozens in the crowd broke out into song, singing “Amazing Grace” and “This Land is Your Land” as others embraced one another and wiped tears from their eyes.

At one point, the crowd broke into a thunderous applause — lasting for about a minute — for Ruth Bader Ginsburg.

Women Globally Lack Access to Contraceptives and Abortions during Lockdown

Women Globally Lack Access to Contraceptives and Abortions during Lockdown