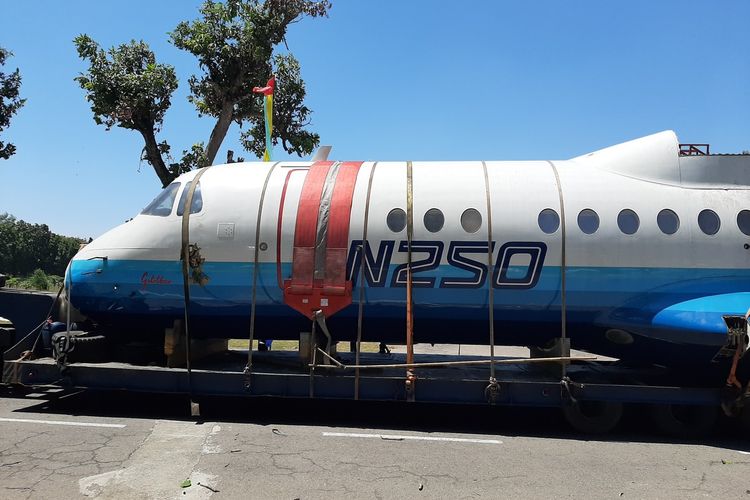 JAKARTA, KOMPAS.com – The first turboprop aircraft made in Indonesia once soared in the air, but it did not fulfill its initial purpose of connecting many islands in the country because of the 1998 financial crisis.

Gatotkaca N-250, however, will be on display at a Yogyakarta museum in Central Java after it sat for over two decades in a hangar in West Java.

The aircraft, which was transported overland from the state-owned aircraft manufacturer PT Dirgantara Indonesia (PTDI)’s hangar in Bandung, arrived in the Central Museum of Indonesian Air Force Dirgantara Mandala in Yogyakarta on August 21.

“The N-250 aircraft will become one of the collections of the planes in Indonesia,” said Air Force Spokesman First Marshal Fajar Adriyanto at the Dirgantara Mandala Central Museum on August 21.

“In the museum, we have 59 in the collection of planes from various countries. The N-250 aircraft is the 60th and this is made in Indonesia,” Fajar said.

Fajar said one of the reasons for moving the aircraft to the museum was to showcase the country’s achievement in the aerospace field. He added this was initiated by the Indonesian Military (TNI) Commander Air Chief Marshal Hadi Tjahjanto when he was still Air Force Chief of Staff.

It was previously reported that the making of the N-250 series was directly led by the then Indonesian minister of research and technology in the new order era, Bacharuddin Jusuf Habibie, who later became the president. At the time, Habibie wanted Indonesia to build its aircraft so that the archipelagic country can be connected by air.

The N-250 aircraft was built in 1986 and made its first flight in 1995. Initially, it was designed as a 30-seat aircraft but was later changed to a 50-seat configuration.

Unfortunately, Habibie’s dream of producing more N-250 aircraft was put on hold following the Asian financial crisis that hit Indonesia badly in 1998. The government terminated the project on the suggestion of the International Monetary Fund.