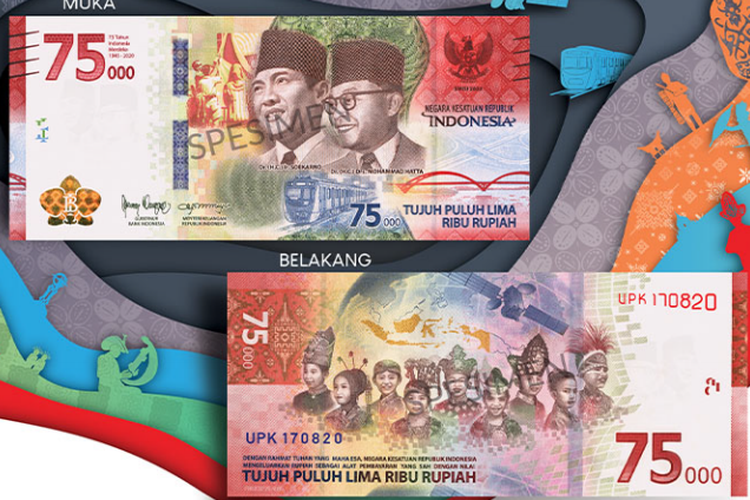 "The [commemorative currency] will be a limited edition Rp. 75,000 bill, of which only 75 million will be printed," said Indonesian Finance Minister Sri Mulyani Indrawati. "The bill will be signed by the Finance Minister as the government representative and BI Governor [Perry Warjiyo]."

"[Indonesia's central bank] did not issue the special currency notes to improve liquidity to fund [the country's] economic activities ... but to commemorate Indonesia's 75th independence day. As such, it is not for normal circulation."

Sri Mulyani hoped that Indonesia's 75th anniversary celebrations will symbolize a revival and optimism in facing challenges such as the Covid-19 pandemic.

The bill features portraits of Soekarno and Indonesia's first Vice President Mohammad Hatta on one side, and Indonesia's diverse cultures and development on the obverse. The note features the country's highlights and achievements since independence.

BI announced that the public can order the bills in two stages. The first stage starts at 3pm on independence day until September 30 on the www.pintar.go.id website. Kompas.com noted that initial demand was high, with the initial run snapped up in 15 minutes.

"Those who are interested can order the currency in BI's 45 branches nationwide or its main office [in Jakarta], as well as banks," said the central bank.

"Prospective customers can order the…

Indonesia Summons Britain’s Envoy over...
Comments
There are no comments
Comment wisely and responsibly. Comments are entirely the responsibility of the commentator as regulated in the ITE Law
Thank You! We have received your report. We will remove comments that conflict with the Community Guidelines and the ITE Law.