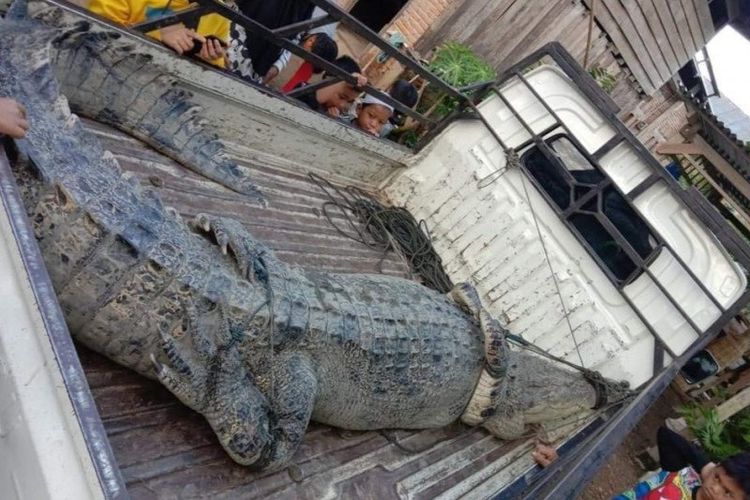 Lihat Foto
A housewife was killed by a crocodile when washing clothes and bathing in Barakkang River in Central Mamuju, West Sulawesi. The crocodile then was caught by the villagers and taken to the Central Mamuju Disaster Mitigation Agency. ()

KOMPAS.com – A four-meter crocodile snatched a 45-year-old housewife in Indonesia’s West Sulawesi as she was going about her daily routine of washing clothes and bathing in Barakkang River in Central Mamuju Regency. The victim disappeared for a day before her body was found.

Spokesperson for West Sulawesi Police Adjunct Senior Commissioner of Police (AKBP) Syamsu Ridwan said victim Nila was at the river when a large crocodile suddenly attacked her at around 6.30am on August 4.

Syamsu said a witness tried to help her but the crocodile had already dragged her into the river.

“The witness saw that the victim and the crocodile came to the surface, got in the water again and disappeared into the river,” state news agency Antara quoted Syamsu as saying. Witness Andi, who is also the victim’s relative, screamed hysterically after realizing the crocodile grabbed and dragged Nila away.

A rescue team then conducted a search.

“The rescue team found the lifeless body about two kilometers from the location where the crocodile attacked her,” said the head of the Mamuju Regency Search and Rescue Agency Saidar Rahmanjaya on August 5.

The victim's body was then handed over to the family for the burial ceremony.

After the body was found, the residents finally caught the crocodile on August 7. The crocodile was caught with a fishing rod which was placed 200 meters from the scene.

“The villagers caught the crocodile…