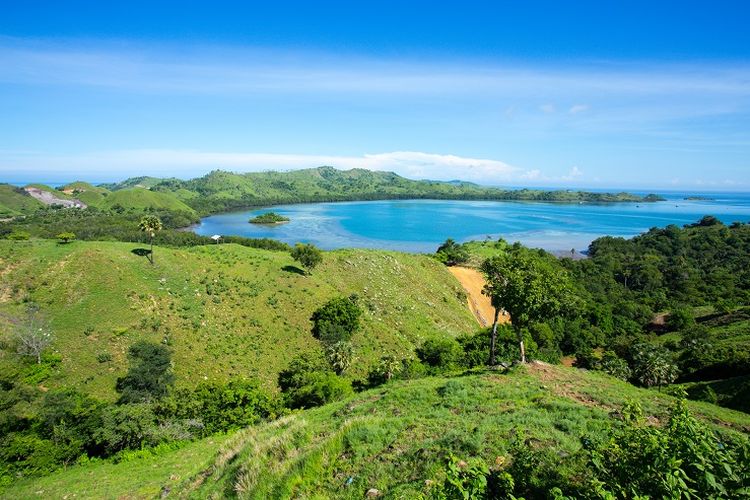 KUPANG, KOMPAS.com – When world leaders converge in Indonesia in 2023, they will be taken to a fishing town called Labuan Bajo at the westernmost tip of the island of Flores, home of the Komodo dragon and other fascinating wildlife.

Away from the usual venues for global events in the country’s resort island of Bali and the national capital Jakarta, the G20 leaders' summit and the Asean Summits are scheduled to be held in Labuan Bajo.

President Joko Widodo has ordered his ministers to accelerate the development of the venues. The surrounding tourist sites are also being prepared for the unprecedented international events in the province. One such site is Kelor Island in West Manggarai regency.

Kelor Island may not be new to many foreign travelers as it is located in the north of Labuan Bajo, one of the more popular tourist destinations in Indonesia for those who want to visit Komodo National Park. Travel time to Kelor Island from Labuan Bajo takes about 30 minutes to one hour by boat.

Though it has natural assets such as pristine beaches and diving sites, the island has yet to be developed. There is no accommodation and restaurants that meet the international standards for tourism facilities.

The regency is allocating 800 million rupiahs ($55,000) to build supporting facilities. Head of Public Relations of West Manggarai regency Florianus Riyan Gampar assured that the island is safe for tourists to visit.

“In 2019 a jetty was built on the island,” Riyan told Kompas.com. The jetty is to facilitate the visitor ships and as a means of supporting tourism on Kelor Island.

Riyan said that last year, the government began extending support for the preparation of the G20 Summit and the Asean Summits.

“Some are directly handled by the central government, while there is special allocation fund [DAK] from the state budget that has been distributed to the 2019’s regional budget of West Manggarai regency.”

He said that the local administrations will support the preparations in any way they can to make the events a success.

To monitor the preparation of the venues, chairman of the National Development Planning Agency (Bappenas) Suharso Monoarfa paid a visit to West Manggarai regency on Saturday, July 18.

During the site inspection, he said that the decision to select Labuan Bajo as the venue to host the G20 Summit and the Asean Summits was made after the government established Tanah Naga Mori in Komodo District as the venue for international meetings.

“This is an important and strategic step for our country as we will be chairing the G20 and Asean Summits,” Suharso said in a statement sent to Kompas.com.

He said his office is preparing an integrated plan for the development on Flores Island. “So when it is done, we can see where the tourist spots are and how is it going to be developed in the future. This one island will become an integrated tourist destination,” he said.

Preparations for the G20 Summit and the 2023 Asean Summits were also held on Kelor Island, which is part of the Komodo National Park, he said.

Supporting facilities being developed on Kelor Island include roads, security guard posts, toilets, and other public facilities which are funded by the 2020 special allocation funds under the tourism development program, said Suharso. The projects are meant to improve services for tourists.

He also mentioned that the special allocation for West Manggarai regency was also cut about 30 percent from 6.78 billion rupiahs ($466,000) to 4.66 billion rupiahs ($320,000) to free up funds for the government's response to the Covid-19 pandemic.

Indonesia is highly experienced in hosting international events and meetings of world leaders, but most were held at venues that have met international standards for facilities.

This is going to be the first time for East Nusa Tenggara province to host international events with leaders from big economies in attendance. And as expected, gatherings of world leaders are accompanied by large numbers of delegates — officials, members of media from various countries, not to mention the international and local tourists.

Preparations now should not only be focused on infrastructure and accommodation but also other equally important aspects such as transportation, airport, communications networks, security personnel to ensure the well-being of the people in all areas, hospitals or health centers, health workers, and professionals in the hospitality industry.