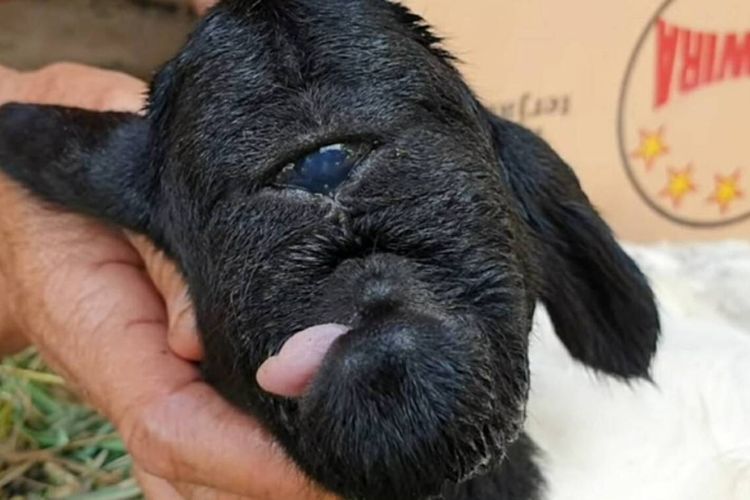 SUMEDANG, KOMPAS.com – A one-eyed sheep died a day after it was born in Cigentur, a village in Tanjungkerta subdistrict in Sumedang Regency, West Java.

News of the sheep went viral soon after it was born on June 22.

A villager of Tanjungkerta subdistrict, Rosliana, 35, said that the sheep was born deformed.

“It died at 3:00 pm here (Tanjungkerta) after it went viral yesterday (June 22). News of its death quickly went around also. It was born on Monday at 11:00 am and died Tuesday at 3:00 pm. It could only survive for 28 hours,” Rosliana told Kompas.com.

Rosliana said the sheep died because it could not nurse and did not have nostrils.

“Perhaps since it could not breathe and nurse, the sheep could not survive,” she said.

Head of Cigentur Village Eti Rohaeti said she has reported the unusual birth to the relevant government agency.

“A representative from the Animal Husbandry Agency came here to find out the cause of such odd circumstance,” she said.

“I hope it brings fortune, especially for our village development,” she added.

Indonesian Envoy to India Dies of...
Comments
There are no comments
Comment wisely and responsibly. Comments are entirely the responsibility of the commentator as regulated in the ITE Law
Thank You! We have received your report. We will remove comments that conflict with the Community Guidelines and the ITE Law.