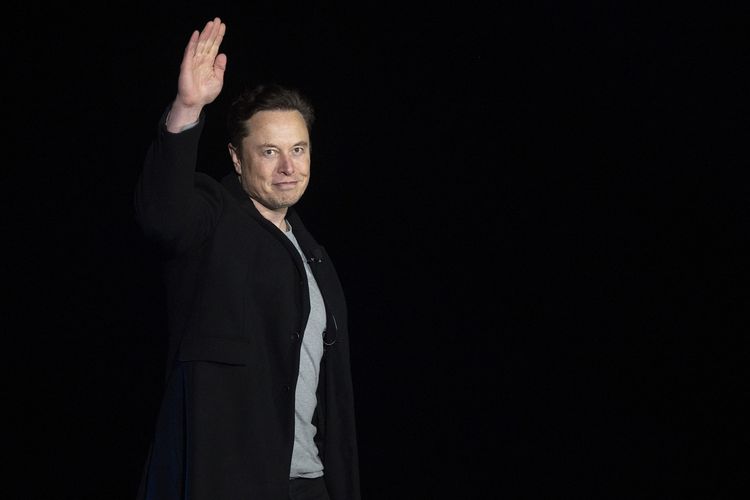 Lihat Foto
(FILES) In this file photo taken on February 10, 2022 Elon Musk gestures as he speaks during a press conference at SpaceX's Starbase facility near Boca Chica Village in South Texas. - Tesla chief Elon Musk has launched a hostile takeover bid for Twitter, insisting it was a best and final offer and that he was the only person capable of unlocking the full potential of the platform. (Photo by JIM WATSON / AFP)(AFP/JIM WATSON)

Twitter's chief executive Parag Agrawal was among those fired, along with the chief financial officer, Twitter's top legal and policy executive, and the company's general counsel, the New York Times reported.

A few hours later, Musk tweeted, "the bird is freed," a reference to Twitter's logo.

the bird is freed

He had also tweeted a video of himself walking into the company's headquarters on Wednesday, Oct. 26, carrying a porcelain sink, posting: "Entering Twitter HQ — let that sink in!''

The Tesla CEO also changed his Twitter profile to refer to himself as "Chief Twit" and switched his location to Twitter's San Francisco headquarters.

On Thursday he shared a message in which he claimed the speculation over his intentions regarding the purchase of the platform had been "wrong" and that he was buying Twitter to "help humanity."

Twitter's stock had edged closer to Elon Musk's $54.20 per share buyout offer for the platform on Wednesday. That was a sign that investors expected the $44 billion deal to proceed ahead of a court deadline at the end of the week.

The Friday deadline to complete the deal was ordered by the Delaware Chancery Court in early October. The ruling followed an epic battle during which Musk signed a deal to acquire Twitter, then tried to withdraw from it. Twitter subsequently sued the Tesla CEO to force him to go through with the deal.

If the parties don't meet…

Facebook Plans to Change Its Name:...
Comments
There are no comments
Comment wisely and responsibly. Comments are entirely the responsibility of the commentator as regulated in the ITE Law
Thank You! We have received your report. We will remove comments that conflict with the Community Guidelines and the ITE Law.