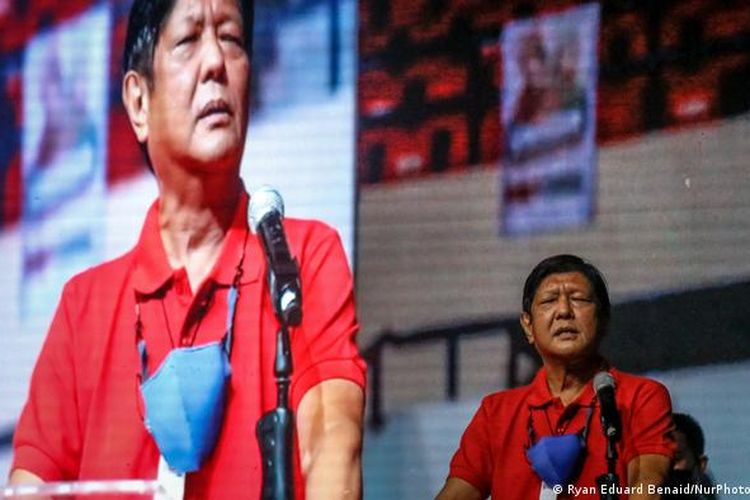 Lihat Foto
The Philippines' incoming president Ferdinand Marcos Jr vowed to prevent any foreign interference in the running of his country in comments aimed at Beijing's claims over the disputed South China Sea.(NUR PHOTO via DW INDONESIA)

KOMPAS.com - The Philippines' incoming president vowed to prevent any foreign interference in the running of his country in comments aimed at Beijing’s claims over the disputed South China Sea.

Ferdinand Marcos Jr., the president-elect of the Philippines, said he would uphold an international ruling against China over disputed waters, vowing on Thursday, May 26 to prevent any foreign interference in the running of his country.

China has staked its claim over nearly all of the South China Sea’s resource-rich waters. In turn, it faces competing claims from other major stakeholders, including the Philippines, Brunei, Malaysia, Taiwan and Vietnam.

“There is no wiggle room there. Our sovereignty is sacred. We will not compromise it in any way,” Marcos Jr. said in his strongest comments yet on handling ties with China.

“We are a sovereign nation with a functioning government. We do not need to be told by anyone how to run our own country,” he said in the interview with his new press secretary that was posted on Facebook. “There is no room for negotiation there. It is sacred, inviolable.”

The Hague-based Permanent Court of Arbitration in 2016 declared that Beijing’s historical claim on the waterway was without basis, a decision that was ignored by China.

After outgoing President Rodrigo Duterte pushed for warmer ties with China by setting aside the ruling over promises of trade and investment, critics say commitments haven’t been met.

Marcos Jr., popularly known as “Bongbong,” is also expected to foster a relationship with China after promising to elevate and expand ties during a phone conversation with Chinese President Xi Jinping last week.