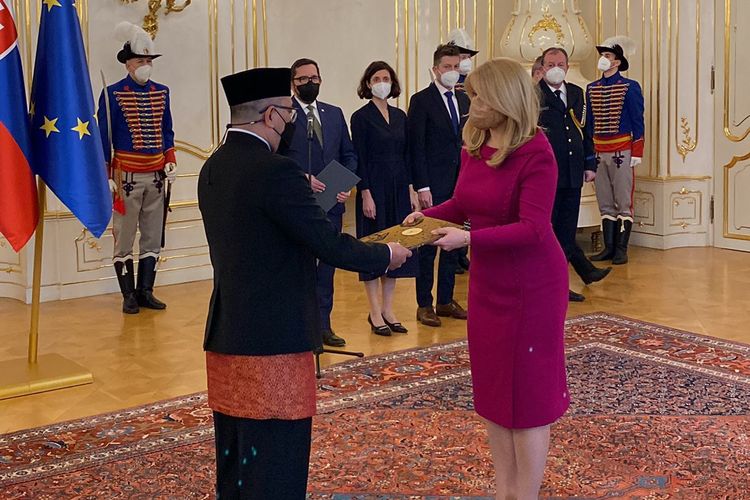 KOMPAS.com – Indonesia and Slovakia committed to strengthening cooperation in various fields to boost the economy that benefits both nations and the people of the two countries.

This was among other issues discussed during a four-eye meeting between the new Indonesian Ambassador to Slovakia Pribadi Sutiono and Slovak President Zuzana Caputová after the presentation of the envoy’s letter of credence at the Presidential Palace in Bratislava on Wednesday, Jan. 19.

“The Slovak Government will always welcome initiatives in various fields and build a partnership with Indonesia to advance the economic relations and improve the welfare of the people in the two countries,” said President Caputová as quoted in a statement released by the Indonesian Embassy in Bratislava.

During the cordial conversation, the Ambassador extended his highest appreciation to President Caputová and the Slovak Government for the good relations and commitments of both nations.

The Ambassador also took the opportunity to highlight several priorities in strengthening the cooperation between Indonesia and Slovakia. This includes the support for both countries’ candidacies in various international organizations, increasing economic ties, investment, trade, and tourism. Also, to enhance the cooperation in the field of technology in renewable energy, health, education, people-to-people contact, and defense.

Pribadi, who was sworn in as the Indonesian Ambassador to Slovakia on Oct. 25, 2021, previously served as an assistant deputy for Asia-Pacific and African Cooperation and acting deputy for Foreign Policy at the Coordinating Ministry for Political, Legal, and Security Affairs. He also served at Diplomatic Missions in Japan, the UK, and Brunei Darussalam as well as in various leadership functions at the Ministry of Foreign Affairs. He joined the Indonesian Foreign Service in 1990.

The bilateral trade of Indonesia and Slovakia from January to November 2021 stood at $45.3 million or up 25.51 percent from $36.09 million compared to the same period in 2020, according to Indonesia’s Trade Ministry data.

Slovakia is Indonesia’s fourth-largest economic partner in central Europe and the country serves as a “gateway to Europe” which brings potential access to 600 million consumers in the region, said Indonesia’s Foreign Affairs Ministry website.

It added that Indonesia was one of the first countries to recognize Slovak independence. After granting its recognition to Slovakia on Jan. 1, 1993, Indonesia established its embassy in Prague, Czech Republic, with concurrent jurisdiction over Slovakia. In 1995, Indonesia and Slovakia officially established their embassies in Bratislava and Jakarta, respectively.

Over the years, Indonesia and Slovakia have intensified their friendly and mutually beneficial relations in various areas, including economic, trade, education, interfaith dialog, tourism, and culture.