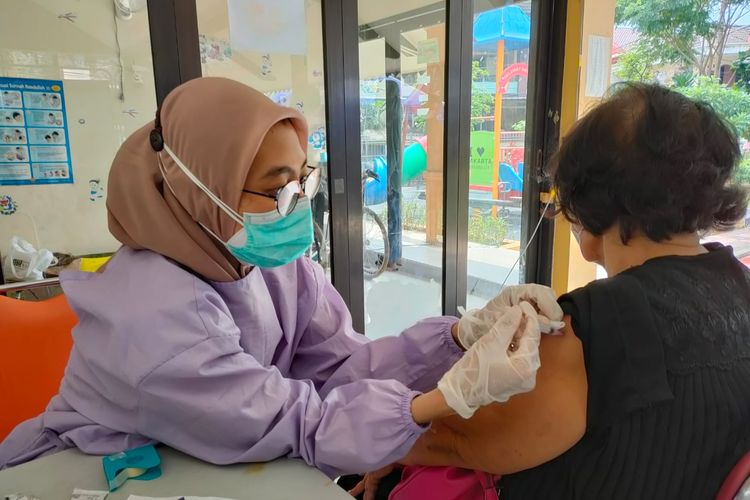 KOMPAS.com - Indonesia kicked off its Covid-19 booster program for the general public on Wednesday, Jan. 12 as the world’s fourth-most-populous nation hit an almost three-month high in cases amid the rise of the Omicron variant.

Elderly and immunocompromised residents, who are being prioritized in the program, queued up at local health centers to boost their defenses against a virus that has infected more than 4 million Indonesians, according to Reuters news agency.

“I feel safer,” said Nurlaeni, 77, after receiving her booster on Wednesday morning. “There’s more Omicron now, so I feel relieved.”

“For me, for my family, this will protect our health,” agreed Rosita Wati, 62, also in the line. “Our immunity will be better.”

The booster rollout comes amid concern about the spread of the Omicron variant in Indonesia, a densely populated developing nation that was hit with a crippling Delta wave in July.

On Tuesday Indonesia recorded 802 new cases, the highest in almost three months, with Coordinating Minister for Maritime Affairs and Investment Luhut Binsar Pandjaitan saying that numbers could peak in February.

President Joko Widodo announced Tuesday that boosters would be offered free for all those eligible after an initial discussion about charging for booster shots sparked controversy.

The booster rollout, for which the Sinovac, Astra Zeneca, Pfizer, Moderna, and Zifivax vaccines have been approved, is running in parallel with the main Covid-19 vaccination program.

Indonesia has pledged to vaccinate more than 208 million of its 270 million people, but less than 56 percent of that target population has received two shots of a Covid-19 vaccine so far, according to health ministry data.

Experts say vaccine hesitancy and logistics in the sprawling archipelago have slowed distribution.

Booster shots in Indonesia will be administered as half doses, in line with studies that confirmed the efficacy of that dosage, said health minister Budi Gunadi Sadikin.