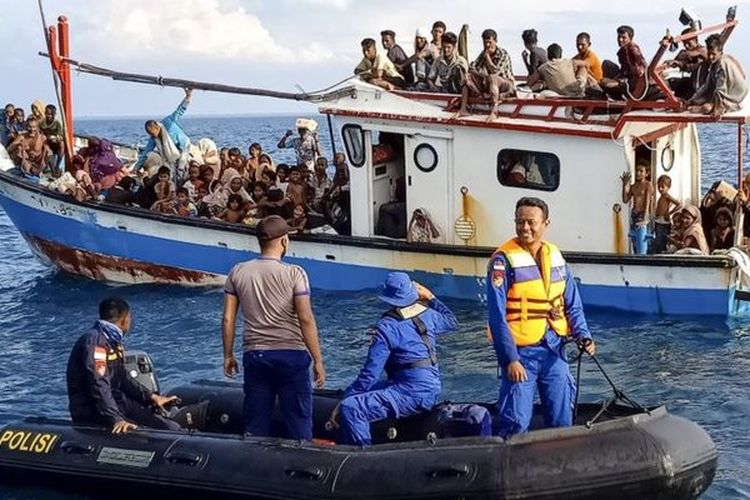 ANTARA FOTO/RahmadA file photo of a group of Rohingya on a fishing boat belongs to Indonesian fisherman in North Aceh dated June 24, 2020.

KOMPAS.com - A group of about 120 Rohingya people, including dozens of children, will not be allowed to disembark on Indonesian territory, Indonesian officials said on Tuesday, Dec. 28.

“The Rohingya are not Indonesian citizens, we can’t just bring them in even as refugees,” navy official Dian Suryansyah was quoted as saying by the Reuters news agency. “This is in line with government policy.”

The boat was first sighted on Sunday, floating about 130 kilometers (80 miles) off of Indonesia’s coast. Local fishermen boarded the vessel and gave the travelers food and water.
Badruddin Yunus, a fishing community leader in the Aceh region of Sumatra, said the Rohingya refugees said they had been at sea for 28 days and that one person had already died.

Matter of ‘life and death’

“The boat, which reportedly is leaking and has a damaged engine, is floating in the open seas in the middle of harsh weather and may be at risk of capsizing,” the UN agency said.
Amnesty described it as a matter of “life and death.”

Rohingya refugees from Myanmar often traverse Indonesian waters to seek refuge in Malaysia. While Indonesia is not a signatory of the 1951 UN convention on refugees, it currently hosts nearly 14,000 registered refugees.

On Tuesday, authorities said they would provide food, medicine, and water to the refugees on board, as well as send a technician to fix their wooden skiff.

Speaking to the AFP news agency, police spokesman Winardy said he hoped that the supplies would help the group “continue their journey to Malaysia as they planned and intended.”
“We will monitor them until they reach their destination,” he said. Indonesia Invites US to Invest in Trans-Sumatera Toll Road