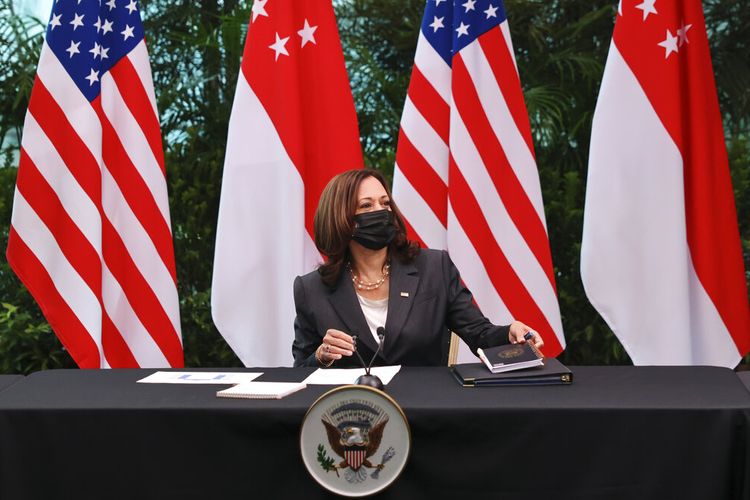 Lihat Foto
US Vice President Kamala Harris attends a roundtable at Gardens by the Bay in Singapore before departing for Vietnam on the second leg of her Southeast Asia trip, Tuesday, Aug. 24, 2021. (Evelyn Hockstein/Pool Photo via AP)(AP PHOTO/EVELYN HOCKSTEIN)

KOMPAS.com - US Vice President Kamala Harris said Tuesday, August 24 that China “continues to coerce, to intimidate, and to make claims to the vast majority of the South China Sea.”

Speaking during a visit to Singapore, Harris said China’s actions “continue to undermine the rules-based order and threaten the sovereignty of nations.”

US President Joe Biden’s administration has made countering Chinese influence a key part of its foreign policy.

“The United States stands with our allies and partners in the face of these threats,” Harris said.
“And I must be clear: Our engagement in Southeast Asia and the Indo-Pacific is not against any one country, nor is it designed to make anyone choose between countries. Instead, our engagement is about advancing an optimistic vision that we have for our participation and partnership in this region.”

China’s foreign ministry spokesman, Wang Wenbin, responded by saying the United States was pursuing a system in which it could “willfully slander, oppress, coerce and bully other countries and not have to pay any price.”

Harris said she was reaffirming US commitments to peace and stability, freedom on the seas, unimpeded commerce, advancing human rights, and international rules-based order. She cited the millions who depend on sea lanes in the region for their livelihood and the billions of dollars in commerce flowing through the region.

She said those in the Indo-Pacific region understand the threats of climate change, including rising sea levels and floods, and that the crisis is “getting much more urgent.” Harris added that in an interconnected world, the issue affects everyone and “requires collective action.”

Speaking specifically about Myanmar Harris said the United States is “deeply alarmed” by the coup carried out by the military earlier this year.

“We condemn the campaign of violent repression, and we are committed to supporting the people there as they work to return their nation to the path of democracy. And we hope that the nations throughout the Indo-Pacific will join us in that effort,” she said.

She is set to fly later Tuesday to Vietnam and become the first US vice president to visit Hanoi.
In Vietnam, she is expected to discuss many of the same issues, including security and climate change.