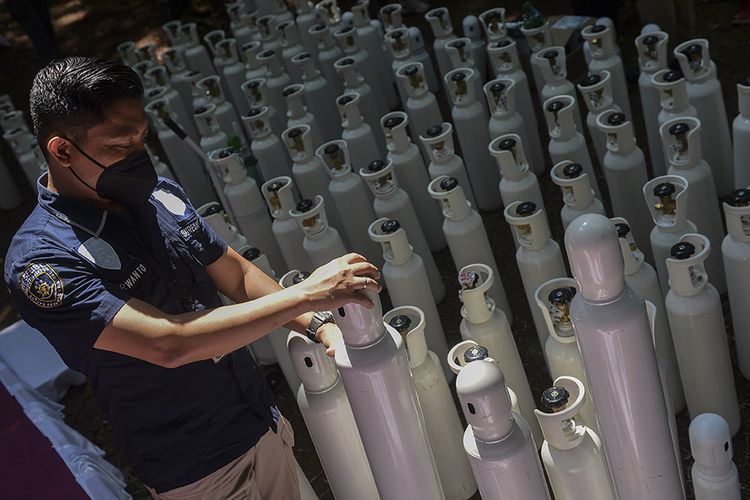 Lihat Foto
A police personnel is arranging confiscated oxygen cylinders before the handing over of the items to the Jakarta Administration on Tuesday, July 27, 2021. (ANTARA FOTO/M RISYAL HIDAYAT)

JAKARTA, KOMPAS.com – Central Jakarta Police is currently conducting an investigation into allegations of illegal importation of 2,000 oxygen cylinders by a company that then sells them at higher prices.

The investigation came after another case of importation in fake goods was revealed by the Crimes Investigation Unit of the Central Jakarta Police previously.

"The results of our investigation show that more than 2,000 illegal [oxygen cylinders] have been allegedly imported [from overseas] and these [items] are not all,” said Central Jakarta Police chief Senior Commissioner Hengki Haryadi on Tuesday, July 27.

A week before, the Central Jakarta Police have arrested a distributor and importer who sold the oxygen cylinders at higher prices. The police seized 166 oxygen cylinders in various sizes and 126 pieces of medical regulator oxygen, which have already been distributed to Jakarta health facilities in support of handling the Covid-19.

“These are only part of the confiscated items. If more items are found, we will work closely with the criminal justice system such as prosecutor office then we will hand them over to the Jakarta Administration before they reach to the public,” said Hengki.

"Actually, since April as many as 2,000 oxygen cylinders have entered Indonesia through the importer. At that time, we secured a total of 166 oxygen cylinders. The case is under investigation and we have named suspects,” said Setyo.

Earlier this month, it was reported that several hospitals in Indonesia faced oxygen shortage as the Covid-19 caseload continues to climb following the spread of the more virulent Delta variant. The ministry of health then hoped that the plan to import oxygen cylinders will be opened and the gas industry will prioritize the production of medical oxygen.

Chinese National Who Allegedly Runs Illegal...
Comments
There are no comments
Comment wisely and responsibly. Comments are entirely the responsibility of the commentator as regulated in the ITE Law
Thank You! We have received your report. We will remove comments that conflict with the Community Guidelines and the ITE Law.