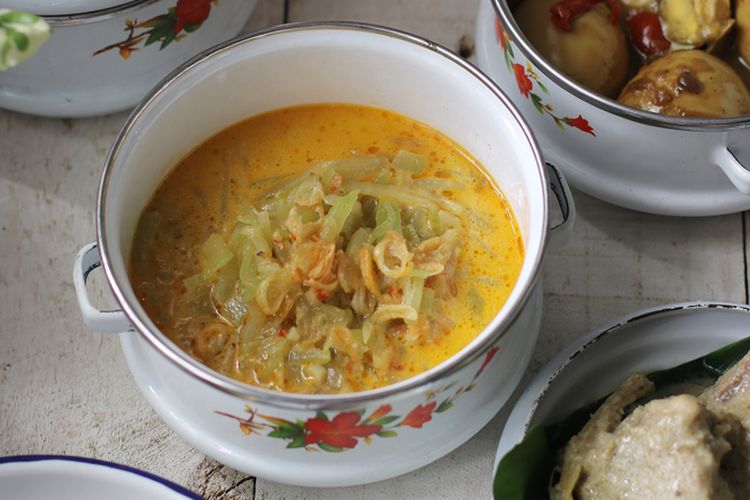 Lihat Foto
Illustration of vegetable dish in a rantang.(Shutterstock/Nurmalia Nurmalia) KOMPAS.com - As one of the biggest Islamic feasts of the year, Muslims in Indonesia and around the world will mark Eid al-Fitr, better known as Idul Fitri or Lebaran, with culinary specialties befitting its standing as an important religious holiday.

For the predominantly Muslim Betawi people of Jakarta, the occasion is extra special, as it marks the first time in a month that they will be eating in the daytime. During this time, they will mark the day by feasting with family and friends during Idul Fitri.

For the Betawi people, Idul Fitri is also a time to give and share. Holidaygoers will visit family and friends and bring with them a rantang, or traditional Eid food hamper.

The hamper's contents evoke Betawi tradition, as it contains specialties like dodol or palm sugar toffee, glutinous rice in their fermented form or tape or as sticky slabs or uli, rengginang rice crackers, as well semur meat stew and ketupat rice cakes.

"The foods in a rantang actually have symbolic value, as they stand for maintaining ties, love, respect and gratitude among one's extended family and community," said Betawi cultural expert Yahya Andi Saputra to Kompas.com on Thursday, May 6.

A custom for the ages

"Though rantang might be synonymous with Idul Fitri, it actually predates Islam." While Yahya acknowledged the tradition has endured through the ages, he lamented that it is losing the battle against time.

"Many Betawi people have gradually given up on this tradition since the 1980's. This is because the bamboo containers and baskets used to store them are increasingly rare," he said.

Shutterstock/Rubiyanton An array of ranting

"Even the metal containers have shown signs of wear and tear, as even then, they are either dented or damaged."

But the Betawi merely adjusted this tradition, not give it up entirely, as they replaced homemade foods with groceries in the form of staple goods and cash since the monetary crisis of the late 90's.

"The staple ingredients are popular because they are useful, practical and obtainable. I remembered this all too well, when my village received a truck of groceries that was distributed in our village," he said.

Yahya noted that even for many Betawi people, groceries now give way to cash during Eid. "Giving cash is practical, and the recipient can tailor it to their needs. In that sense It is beneficial, especially for those who are economically less fortunate.

However, old-fashioned rantang is undergoing a revival, as an increasing number of Betawi people have started to revive the rantang tradition over the past five years by making the container the center for various Eid festivals.

Boasting names like Lebaran Besek, Lebaran Bongsang and Lebaran Rantang, they are all named after parts of the hamper.

"For older people, especially those who were my age,the rantang brings back memories of the past," said Yahya. If they are catchy enough among young people, the Rantang tradition might just get new lease on life for future generations. Indonesia to Apply No Exceptions in Holiday Travel Ban