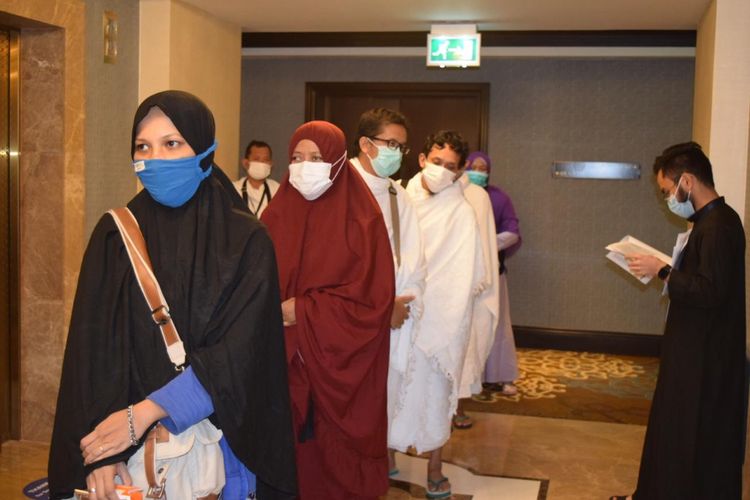 Lihat Foto
Indonesian pilgrims are waiting for their turn to undergo swab testing in a Mekkah hotel on Tuesday, November 3, 2020. (Dokumentasi Amphuri)

“The Saudi Arabia government now temporarily closes its visa process to evaluate the implementation of the umrah pilgrimage for Indonesians,” acting director-general for Haj and Umrah Management at the Ministry of Religious Affairs Oman Fathurahman said in a statement on Monday, November 16.

Previously, Indonesia’s Minister of Religious Affairs Fahrul Razi had sent a team led by Oman to Saudi Arabia. His team then conducted meetings to coordinate with Saudi Arabia’s Ministry of Haj and Umrah and other relevant agencies.

Based on the meetings, the Ministry of Religious Affairs told the Umrah Travel Operators (PPIU) to make more comprehensive preparations in the implementation of the umrah pilgrimage during the Covid-19 pandemic, including in the familiarization and education programs for the pilgrims.

“PPIU, which will send off the umrah pilgrims during the Covid-19 pandemic, must be fully prepared. The key is an education program,” Oman said.

“PPIU must provide intensive and detailed education programs on the procedures of the implementation of umrah pilgrimage during the pandemic,” Oman added.

It was reported that the Saudi government had lifted its temporary visa restrictions to allow foreign pilgrims to perform umrah after a seven-month pause due to the Covid-19 pandemic.

Indonesia was one of the first countries to get the opportunity to send off its pilgrims.
There were a total of 359 umrah pilgrims from Indonesia who flew to Saudi Arabia. They departed from Soekarno-Hatta International Airport in three batches between November 1 and 8.

The kingdom has reported more than 340,000 confirmed cases of coronavirus, while over 5,000 have died.