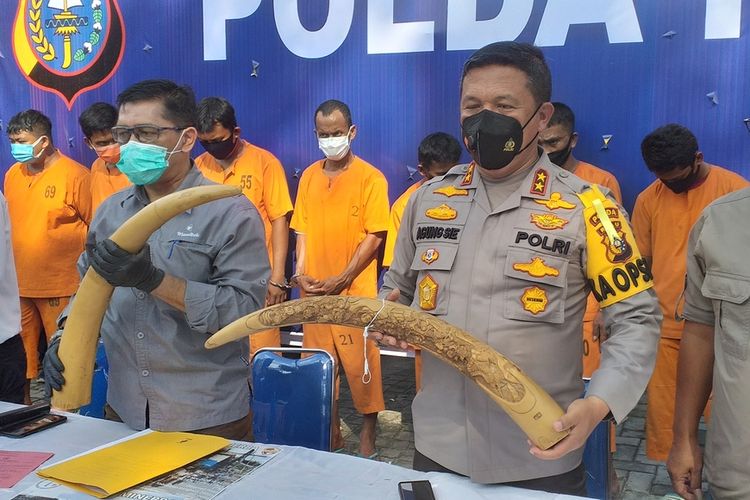 Lihat Foto
Riau Regional Police display the elephant tusks seized in a bust during a press conference in the provincial capital Pekanbaru [12/11/2020](KOMPAS.COM/IDON)

PEKANBARU, KOMPAS.com – The contraband trade continues to thrive in Indonesia, even as the Covid-19 pandemic slowed down other parts of the Indonesian economy.

The Riau Regional Police highlighted this, after they arrested three men identified as YP, YS and WG for attempting to buy and sell a pair of tusks from endangered Sumatran elephants during a joint raid with Nature Conservancy Agency officials on 11 November.

“We arrested the suspects in Kuantan Singingi regency, after a search of their car uncovered the 80-centimeter tusks,” said Riau Police Special Crimes Directorate head Chief Police Commissioner Andri Sumardadi at a press conference in the provincial capital Riau on Thursday, November 12.

“YP attempted to sell the tusks to WG via YS, who acted as the middleman in the transaction, for Rp. 100 million [$7,046.62]. He confessed to obtaining the tusks in Jambi Province, where he worked as a teacher in a vocational school.”

He noted that the police are still trying to determine if YP and YS are part of a bigger poaching ring targeting Sumatran elephants for their tusks. If found guilty, the men face five years behind bars and a Rp. 100 million fine under a 1990 Conservation Laws.

Aside from poaching, Sumatran elephants also faced habitat loss from deforestation and the conversion of their habitat to human settlements or palm oil plantations.

Indonesia's Police Tracing Coral Smugglers' Network...
Comments
There are no comments
Comment wisely and responsibly. Comments are entirely the responsibility of the commentator as regulated in the ITE Law
Thank You! We have received your report. We will remove comments that conflict with the Community Guidelines and the ITE Law.