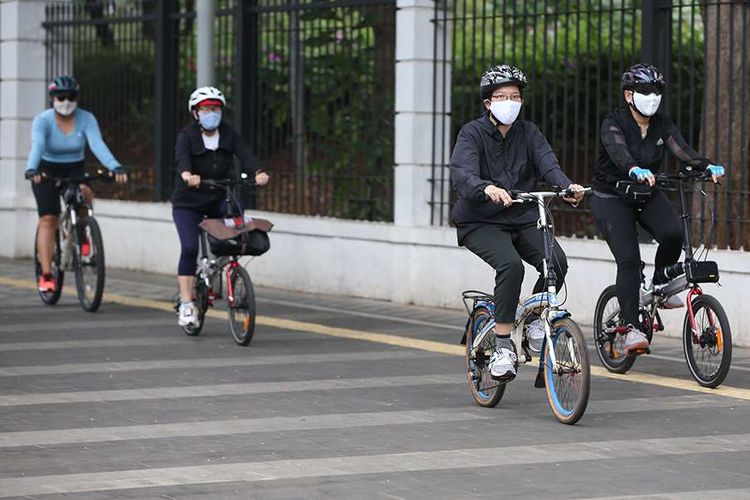 JAKARTA, KOMPAS.com – The Jakarta Police has viewed the spate of bicycle-related robberies with concern as the crimes affect Jakartans from all walks of life.

“Before, motorcyclists were targeted by criminals who often made off with the vehicles. Now cyclists are the victims, not least because of the increasing number [of Jakartans] who bicycle as a healthy lifestyle following the Covid-19 outbreak.”

He noted that many of the cases occurred towards the end of the year.

“We received 14 reports of robberies on cyclists between September to the beginning of November," Nana said, noting that many of the crimes were found after the police formed a team to crack down on the robbers.

"We have solved six cases and captured 10 perpetrators aged between 17 and 28, while the remainder are still under investigation."

He did not rule out the possibility that they might be part of a larger group. Nana estimated that the true number of cases might be higher, as not all cyclists reported the crime.

“The suspects monitored their victims as they bicycled alone, then would trip them and steal their valuables. Most of the crimes occurred between 6 and 10 in the morning,” he added.

“Those who wish to bicycle should do so in groups instead of alone, especially in the evening where the likelihood of bicycle-related robberies increase. I would also suggest cyclists to refrain from bringing their cellphones or other valuables or stow it securely on their person.”

Nana also called for an increase in CCTV cameras installed on streets where the robberies took place or are likely to occur.

“We realized that the number of CCTV were short of our needs. We are coordinating with the Jakarta Provincial Administration to increase their number,” he noted.

However, Jakarta Police spokesman Chief Inspector Yusri Yunus said the public’s reporting of the crime is the most effective countermeasure.

The crime affected cyclists ranging from Indonesian actor Anjasmara Prasetya and Marine Colonel Pangestu Widiatmoko. Cycling has seen a revival as both a sport and a mode of transportation, since the Covid-19 pandemic was first detected in March 2020.