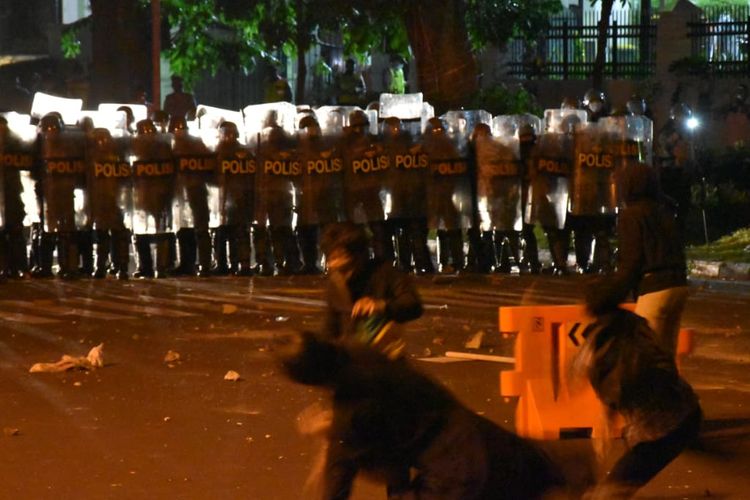 BANDUNG, KOMPAS.com – Protests against the new job creation laws in different places in Indonesia’s West Java ended in chaos, causing damage to a police vehicle and a police officer was injured on Tuesday.

In Bandung, the capital of West Java province, the protesters closed the Pasupati flyover and destroyed a police vehicle. The chaos occurred in front of the West Java Legislative Council building.

A Kompas.com reporter on the scene saw the protesters, clad in various alma mater jackets, initially gathered in front of the West Java Legislative Council building at 15:45pm local time. Some gave speeches, burned tires, and performed theatrical acts for about an hour. The protesters urged the government to revoke the new job creation law.

The protesters then moved to Pasupati flyover, causing road closure and traffic congestion. After a few minutes, the protesters began to disperse and the traffic returned to normal.

However, some protesters remained to stay at the legislative council building. And in the afternoon, the protest tensions heated up. Some were seen throwing objects towards the police on the other side of the fences of the legislative council building. The situation became relatively calm during the Maghrib prayer. But after the prayer, the tensions began to heat up again.

The police tried to calm the crowd and urge them to disperse. However, the protesters became increasingly violent and pushed the fences of the legislative building. The chaos was inevitable and the police fired teargas at protesters, urging them to back off. The protesters fled in various directions and some threw stones at the police vehicle.

“Please restraint yourselves from being an anarchist,” urged the police officer through loudspeakers.

The tensions continued until 18:45pm local time. The barricades set up by the police gradually began to push back the demonstrators.

Meanwhile in Serang, Banten the chaos started as the police urged the college students to disperse after the time limit was ended. However, the students ignored the police, starting to throw stones and fireworks at the police. The police then fired teargas at the crowd.

Anti-Government Protests Grow Again in Thailand
Comments
There are no comments
Comment wisely and responsibly. Comments are entirely the responsibility of the commentator as regulated in the ITE Law
Thank You! We have received your report. We will remove comments that conflict with the Community Guidelines and the ITE Law.