Islamist Militants Behind Bombing in the Phillippines Jolo Island 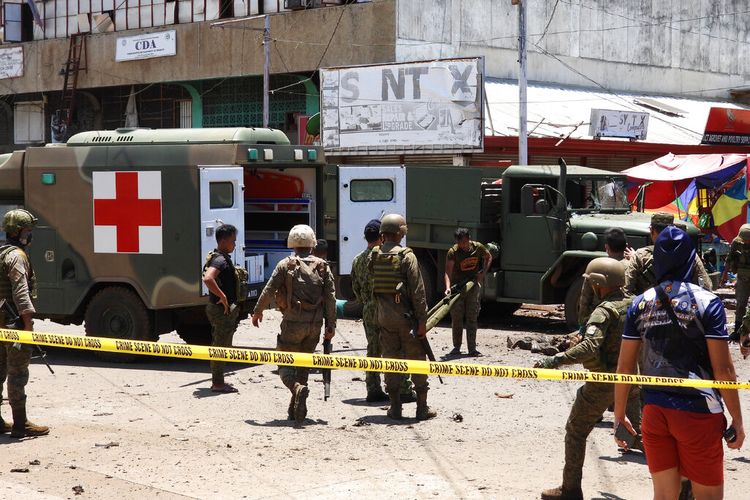 Lihat Foto
A suicide bombing in Jolo, the Philippines killed 15 people with Islamist militants suspected to have been masterminds of the attack.(NICKEE BUTLANGAN)

MANILA, KOMPAS.com – A suicide bombing in Jolo, Philippines killed 15 people with Islamist militants suspected to have been masterminds of the attack.

Security forces and civilians are among those who were struck or perished in the bombing that left 75 people wounded.

Jolo island is a stronghold of Abu Sayyaf, an Islamic State-linked group that has intensified its campaign in recent years through the use of suicide bombers.

Monday’s bombings occurred within an hour of each other.

There was no immediate claim of responsibility for what was the biggest attack of its kind in the southern Philippines since January 2019, when a double suicide bombing at a Jolo church killed more than 20 people and wounded over 100.

The military said the first blast happened around noon on Monday, when a homemade bomb in a motorcycle was triggered close to two parked army trucks, killing soldiers and civilians.

As police and army surveyed the scene, a suicide bomber tried to breach a cordon and detonated her device, killing herself and several others.

In total, eight members of the security forces, six civilians and the bomber were killed and 27 security personnel and 48 civilians were wounded in the attacks on Jolo, one of a chain of mainly Muslim islands in the southwest of the majority Roman Catholic country.

"Authorities are now conducting an investigation, which includes identifying individuals or groups behind these dastardly attacks."

The troops were among hundreds from a special infantry division created by President Rodrigo Duterte to destroy Abu Sayyaf, a group notorious for banditry, piracy, and kidnap-for-ransom and countless attacks on civilian and military targets.

Monday's incident was one of at least six suicide bombings in the past three years, a mode of attack previously rare in the Philippines, despite decades of separatist conflict that has given rise to Islamist sentiments.

Marcos Jr. Election Lead Raises the...
Comments
There are no comments
Comment wisely and responsibly. Comments are entirely the responsibility of the commentator as regulated in the ITE Law
Thank You! We have received your report. We will remove comments that conflict with the Community Guidelines and the ITE Law.